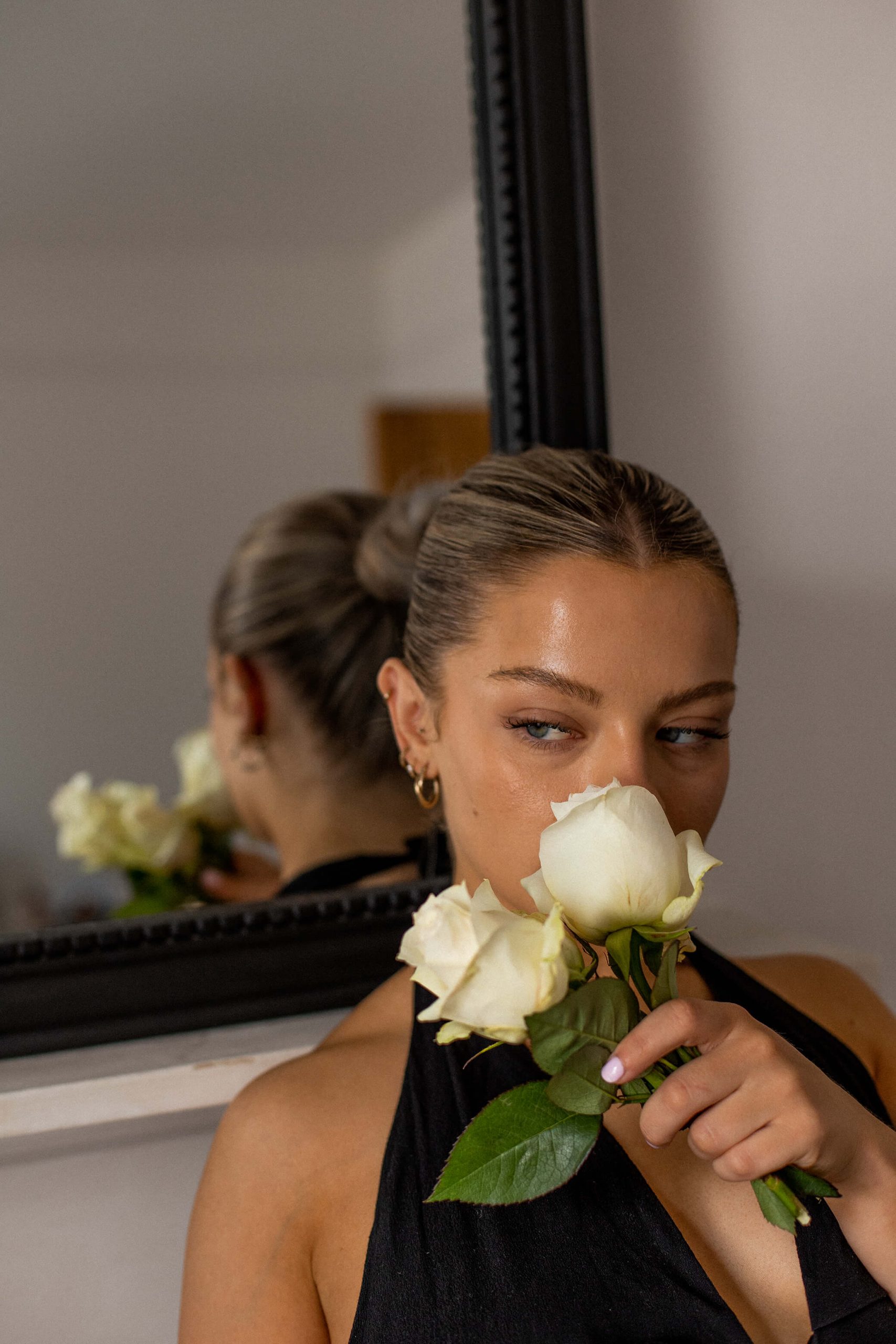 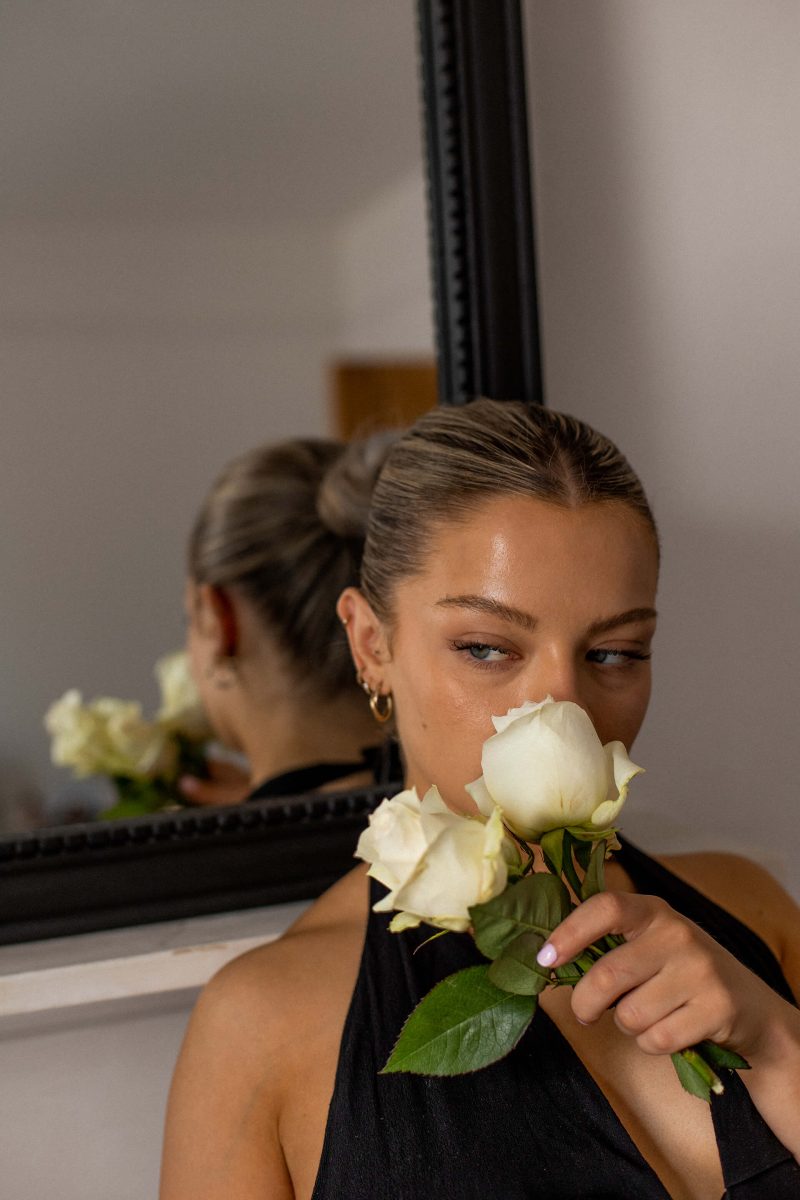 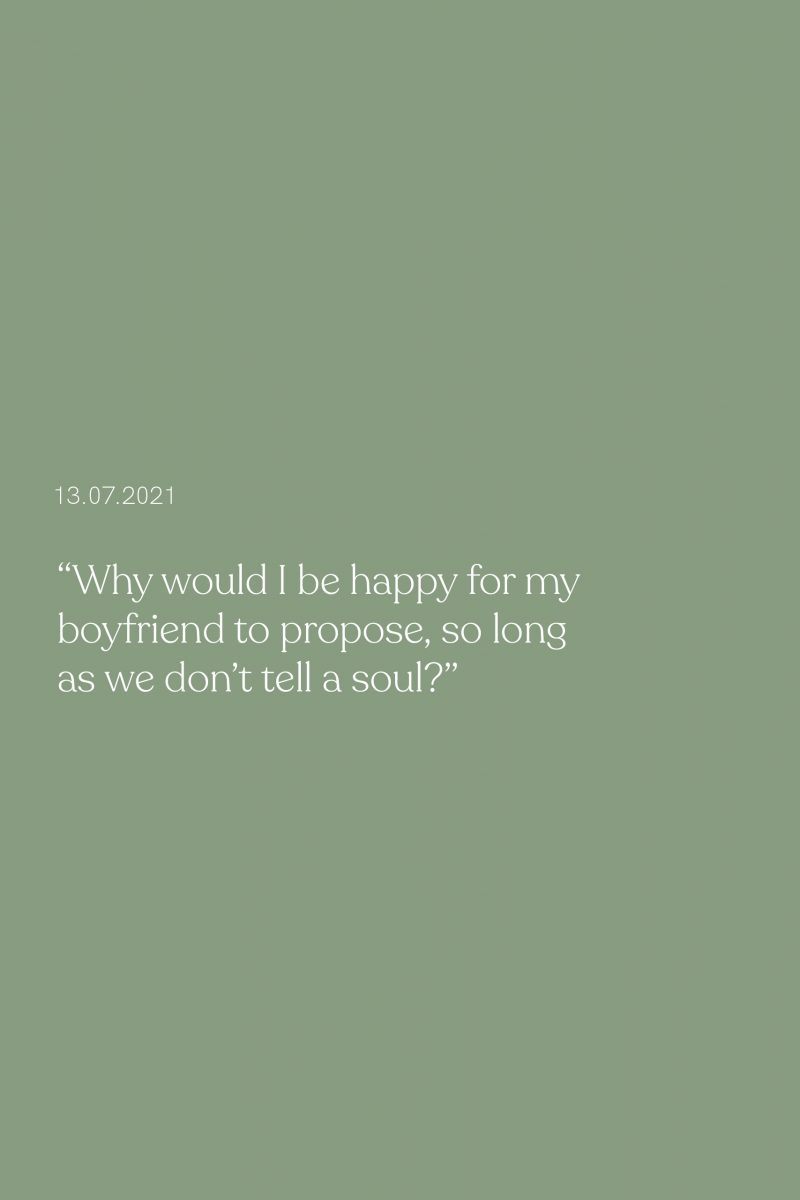 I'm not a professional (in any sense of the word, really) and I wouldn't recommend looking online for any serious answers in your real life, but hopefully some of the conversations we have here make you feel a little more normal and a little less alone.

Before we jump into today's submission about the big M, you can share your own anonymous story here. I'll obviously see who you are and what you're saying, but your identity is never shared with anybody else (my memory isn't great either, if that makes you feel better). If you're really keen to keep things hush hush, make sure there aren't any details in your story that could give away the game.

Now, let's get into the meat of it.

"Why would I be happy for my boyfriend to propose, so long as we don't tell a soul - yet the idea announcing an engagement fills me with a big bucket of HELL NO?

I love my boyfriend and am fully committed (including long term). I'd love to wear a fancy new engagement ring and know that we were ~together~ officially. But the amount of unnecessary small talk it evokes is just overwhelming, the queries that people have about wedding plans that I have no intention of making soon, the squeals that make no sense to me because - of course I love my boyfriend, that's is just another way of expressing that, right?

My boyfriend would love to propose, and would have done a while ago if he had not respected my feedback that I would be saying yes for him, not for us. We've discussed buying somewhere together, which in my head is a "bigger deal" so hopefully he knows that I am genuinely just having a bit of a freak out, and it's nothing to do with him. How do I get my head around this?!"

First of all, the communication between you two and the respecting of boundaries: we LOVE to see it *chef’s kiss*. A lot of the time when we discuss relationship topics in AMA it’s within the realm of a disconnect between partners or an unspoken anxiety which has been left to fester, so it’s a heartwarming change of pace to be instead dealing with frustrations from the outside.

A lot of what you’re expressing about engagement and marriage resonates with my own worries and preoccupations: many times I’ve turned over the idea in my head of a wedding without a legal marriage, having the party but not signing the document. Or eloping, quickly and quietly, to only reveal my transformed marital status when the inevitable ‘Miss or Mrs’ comes up at a receptionist’s desk. But before we dive in, let me say:

Marriage as a concept is weird as hell - it’s literally a contract to abide by certain obligations, with another person, FOREVER. Some people can throw themselves into that without so much as a second thought, but for some of us, it’s hard enough wrapping our heads around the idea that we’re old enough to be married, let alone actually doing it.

I wonder if within your hesitation to announce an engagement, there is an element of wanting to retain control of your own narrative? When it’s a beautiful secret held between you and your partner, everything moves at your own pace. You can discuss dates, meals, venues and vows when you’re ready. Heck, if you’re ready - maybe you want to exist within engagement because the willingness to formally cement your relationship is enough. You’ve pledged yourself to one another and the intention is just as valuable as the signature to formalise it. There exists this imposition that engagements should last no longer than a year and a half - two years at a push - but says who? The shape of your relationship should be dictated by you two, and you two alone. If that shape is a little more unconventional - a little more dodecahedron than square - then so be it. The way it has always been done may not be the best way for you to do it.

And I appreciate wanting to keep the news to yourself - at least when you keep the engagement under wraps, you have the time to sink your roots into it and see how it fits. There’s no rush to start planning dinners or dresses, no inferred panic about band availability or saying intimate vows in front of an audience. You can enjoy the engagement for what it is, rather than what it is to become.

This, to me, is completely rational. Once the news enters the ears of others, it’s off, into the wind, existing independently of you as if you needn’t be involved in the arrangement at all. To those who welcome marriage and know certainly that this is the path for them, the anticipation of the sharing engagement news must be terribly exciting. For those of us who are a bit more ‘what the fuck, I was only 17 a second ago, how can I be someone’s spouse?’, the announcement makes it real. The announcement is the floodgate and baby, we ain’t ready to swim yet.

Let’s also analyse ‘the adult path’, for a moment. Traditionally it looks a little something like this: school > higher education > first job > find a partner > live together > get married > have baby > have another baby? > get lost in parenting > retire. There may be some variations along the way - having a sproglet before marriage, or buying your first home before you’re ever engaged - but generally, this is the familiar shape we recognise.

Whether motivated by conscious decisions or simply allowing the treadmill of expectation to move underfoot, we find ourselves positioned in a certain direction, in (not always mindful) pursuit of adulthood’s milestones, the things we know we’re able to swerve but perhaps feel we ought to do anyway.

I’m sure there is immense happiness to be found in a life like this, but there is also the insidious concern that you’ve completed most of your ‘big moments’ before you’ve much had the chance to properly live. Marriage is often attributed as being the gateway to “the next chapter”, but what if we want to exist within our current chapter, just with a little spouse sprinkled on top?

It comes down to change, I think. Engagement, marriage, buying a home: these are big changes, huge life moments which we perhaps predicted would happen one day but never imagined what it would feel like when ‘one day’ was today. In your teens you map out this expansive program of possibilities and then suddenly life happens to you, and the future becomes the present and the great stretch ahead no longer feels like a great stretch. That in itself is terrifying - the irrefutable, irresistible passage of time - but couple this with external sources doubling down on the wedding mania, and it all gets a bit wild.

The bottom line is you decide if and when you get engaged, and you decide if and when you get married. Maybe, ultimately, you don’t want to - that doesn’t make your love or relationship any less valid. Marriage as a social construct can exist without a ceremony and piece of paper; you’re already committed to each other long term, so tell me what the real difference is?

But if you do want to get married (and if so, I'll start looking for hats) you are within your power to do it your way. If you want to keep it a secret for 2 weeks, 2 months, 2 years, then do. If you want to tell people with the boundary that you aren’t ready for wedding chat yet, then do. It’s a celebration for yourself and your partner to enjoy, so fucking enjoy it babe! Take responsibility for your own happiness and strip away the noise to what is at the core: two people, in love, devoted to one another for as long as it breeds happiness.

In the meantime, one (potentially unethical life tip) I can give you is this: when you tell people you’re never getting married, they stop asking. My partner and I are both 27 so the possibility of marriage and children is becoming more realistic than the abstract fantasy it once was, but we’re unsure of both and are upfront about it maybe (probably) not happening. Since there’s nothing to ponder over - no guess work as to ‘will he?’ and ‘when?’ - nobody asks me. What is there to ask about? It isn’t the same for you, but considering it’s nobody’s business but your own, a little white lie to keep the questions at bay may give you the mental space to decide what you want to do and enjoy your decision, without being peppered with marital interrogations about dates and dresses.

It boils down to being on your own timeline. Don’t stress about what you should or shouldn’t be feeling, don’t measure yourself against the milestones of others and don’t worry about doing it the right way.

This is your life and your love, so do it your way.