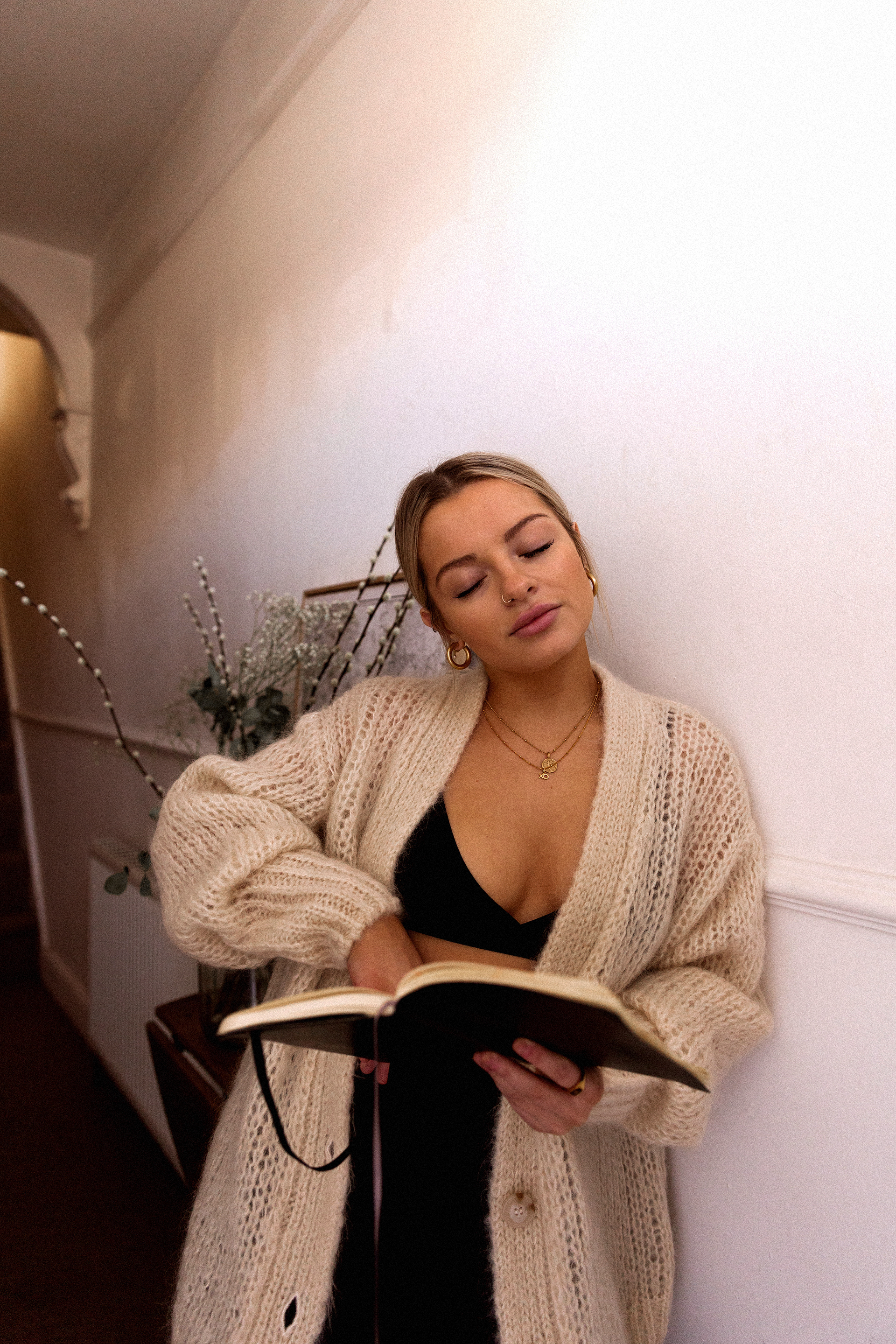 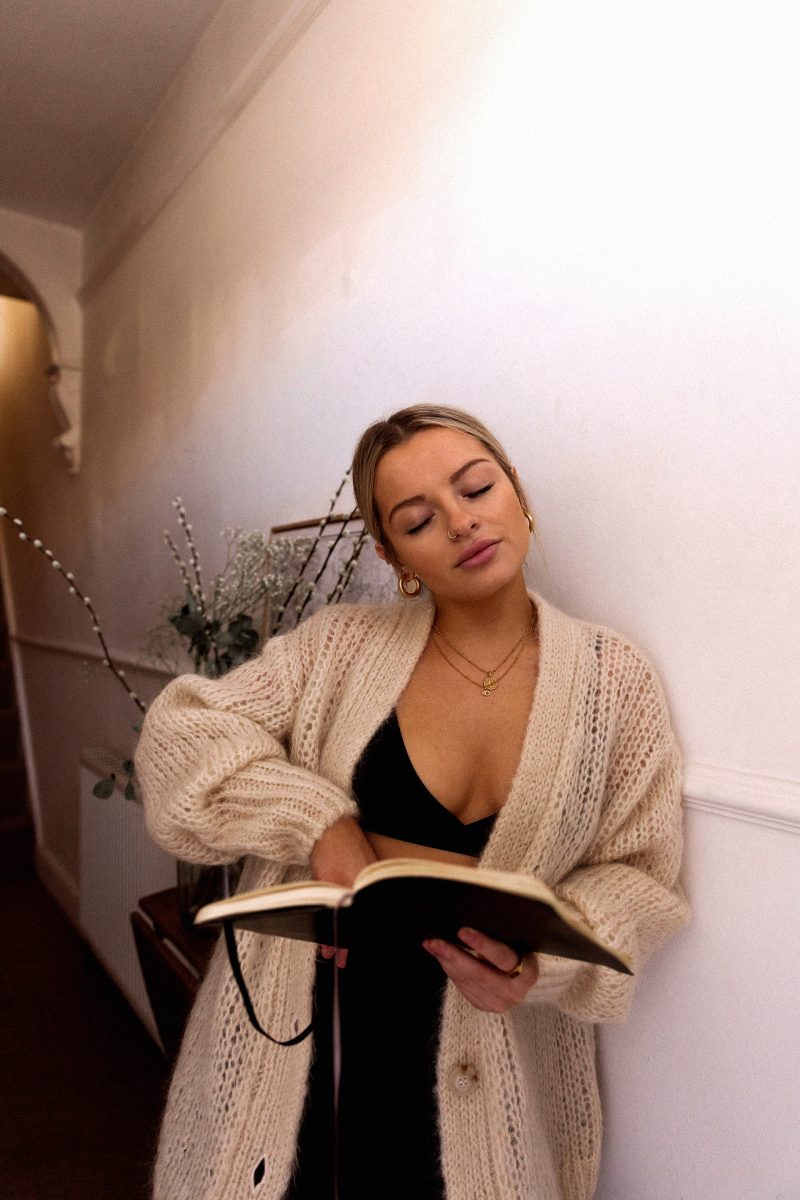 Bullet journalling: a term until, very recently, I had believed to refer to either a very small notebook, or some kind of American scrapbooking practice. Potentially something to do with bullet points, but not a system of planning designed to organise your thoughts on paper. Not an ordered way of doing something.

Well, I’ve been delighted in my discovery. I stumbled upon a bullet journalling video whilst up to my neck in internet-time-wasting some Sunday afternoon, and two things subsequently happened. One: I felt like a bit of a prat for not knowing that this hugely popular journal system existed, and that each time Hannah had mentioned it to me, I had thought she was just going hell-for-leather in a Moleskin with a roll of coloured pens (technically true, but I am now a sworn in member to the fine-liner crew too); and two: following further research, I committed myself to having a proper whack at this whole journalling malarkey.

It seemed (and probably seems, to those who haven’t given it a go) like a jumped-up way of list-making; a commercialised reinvention of the classic pencil and paper, or even the digital notes that so many of us gather and then almost instantly forget. I didn’t want to be sucked into a gimmick, especially not the kind I related to people who wore beanies too small for their heads and knew the ins and outs of different coffee bean origins despite working in insurance for Aviva. It felt ostentatious, in a way; “yes, I journal. Oh no, it’s not your typical list. It’s a SYSTEM. A PROCESS. You focus on your GOALS and the bIgGeR pIcTuRe. Shopping lists? Get that shit out of my pleather-bound organic Arrabica bean Bullet Journal.”

It’s not like that at all, and I realise now that I had been struck with an ailment which acutely affects those in the working-class who have somewhat mobilised, willingly or not, into the world of tapas bowls and Sunday park walks. It’s a resistance to admit that you too want to indulge in some of the frivolous trappings of a life you weren’t raised in. You are now the kind of ski-trip wanker you begrudged as a 13 year old.

Anyhow, I digress. Whilst the inventor of the system does produce his own notebooks with all of the key markers included, he doesn’t insist on these as essential, so all you really need is a notebook (or a bunch of stapled-together paper if you’re still suffering with the above) and a pen. From thereon out, you’re free to organise your journal as you please. The system sets out some basic guidance on the fundamentals of the practice - the Index, Future Log, monthly breakdowns and daily notes - but beyond that, you’re free to customise in whichever way works best for you. When I mentioned that I was giving bullet journalling a go, I had a few questions about which sections I’d chosen to include and how I’d mapped out the pages, so I wanted to share a little overview of my own system.

These sections form the foundation of bullet journalling as a practice, and are explained fully in the tutorial video here. I won’t talk about these too much as they aren’t personal to my own organisation, but as a basic overview, the Index acts as a sort of contents for every numbered page throughout the journal, the Future Log maps out each month of the year so you can include any important dates/events and plan your weeks/months around them (I include a ‘content focus’ for each month for a vague sense of direction), and the monthly overview lists each day of the month vertically down the page so you can insert each day’s activity in a succinct and easy-to-read way.

I’m not usually a yearly goals kind of person (although I do afford myself the liberty of New Year’s Resolutions such as ‘drink more wine’ and ‘have more sex’), but I wanted to invest myself fully in this whole bullet journalling thing, so I thought I’d give these a go. I sectioned a page off into six blocks, and titled them ‘Personal’, ‘Finance’, ‘Travel’, ‘Career’, ‘Health’ and ‘This Time Next Year’, with paying off my student overdraft, finally leaving Europe (in the sense of a holiday, not #Brexit), attending my first cervical screening and releasing 6 episodes of my podcast as some of the goals included. I kept things fairly simply with the room for expanding/elaborating as the year goes on, with the view of using the goals as a sort of guidance markers for the year. If I get to 2019 and I haven’t ticked a single thing off, then I need either a kick up the arse or to reevaluate how I’m doing things, but if a few remain unchecked then that’s fine with me. It’s not too rigid a path to stick to. 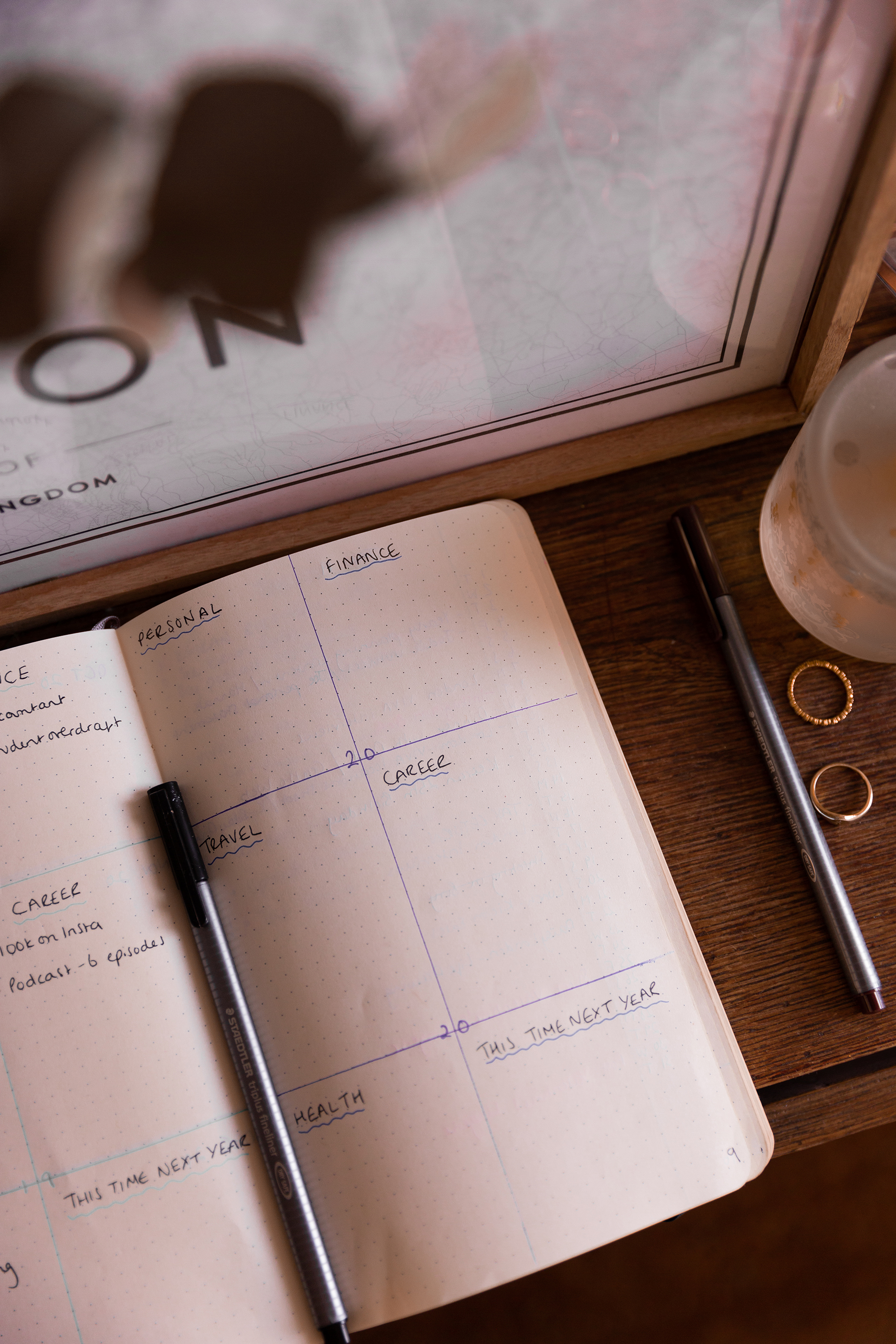 One of the things I found most difficult towards the end of last year was planning my blog content around my freelance work. I wasn’t scheduling ideas ahead of time, or even necessarily collating them all in one place (I have a thousand partially-penned lists in my previous notebook, all headed ‘Blog Post Ideas’ which were expressed and then never revisited), so when it came to Monday morning and it was time to start writing, I found myself trawling endlessly through the internet for inspiration, before staring mystified at a blank page.

I’m determined to be more organised this year, and not only keep all of my ideas in one handy spot, but to also plan out which pieces of content are going live on which day. I’m usually an off-the-cuff person so this is very much out of my nature, but it seems to be working so far (and helping me feel more relaxed come the start of the week). Just as I did with the monthly overview, I listed the days of the week vertically down the page, and then split that down the middle, creating two separate sections. I titled these ‘Blog’ and ‘Instagram’, giving myself a day-by-day view of Mon-Fri and available slots for when both written and visual content could go live.

On the opposite page, I started a collection called ‘Blog Post Ideas’. I also created a key which easily signifies which category each piece of writing falls into, whether it be beauty, lifestyle, fashion or a think piece. If I decide to pick up an idea and run with it, I can then pop it into the schedule and see how it sits amongst my other posts, helping to recognise if I need to diversify slightly over the next few weeks (to include more fashion content as opposed to lifestyle, for example).

I’ve found this really helpful in terms of structuring my week and month ahead, and knowing that I have a central accumulation of all my plans and a set page to refer back to means that writer's block is that little less terrifying. 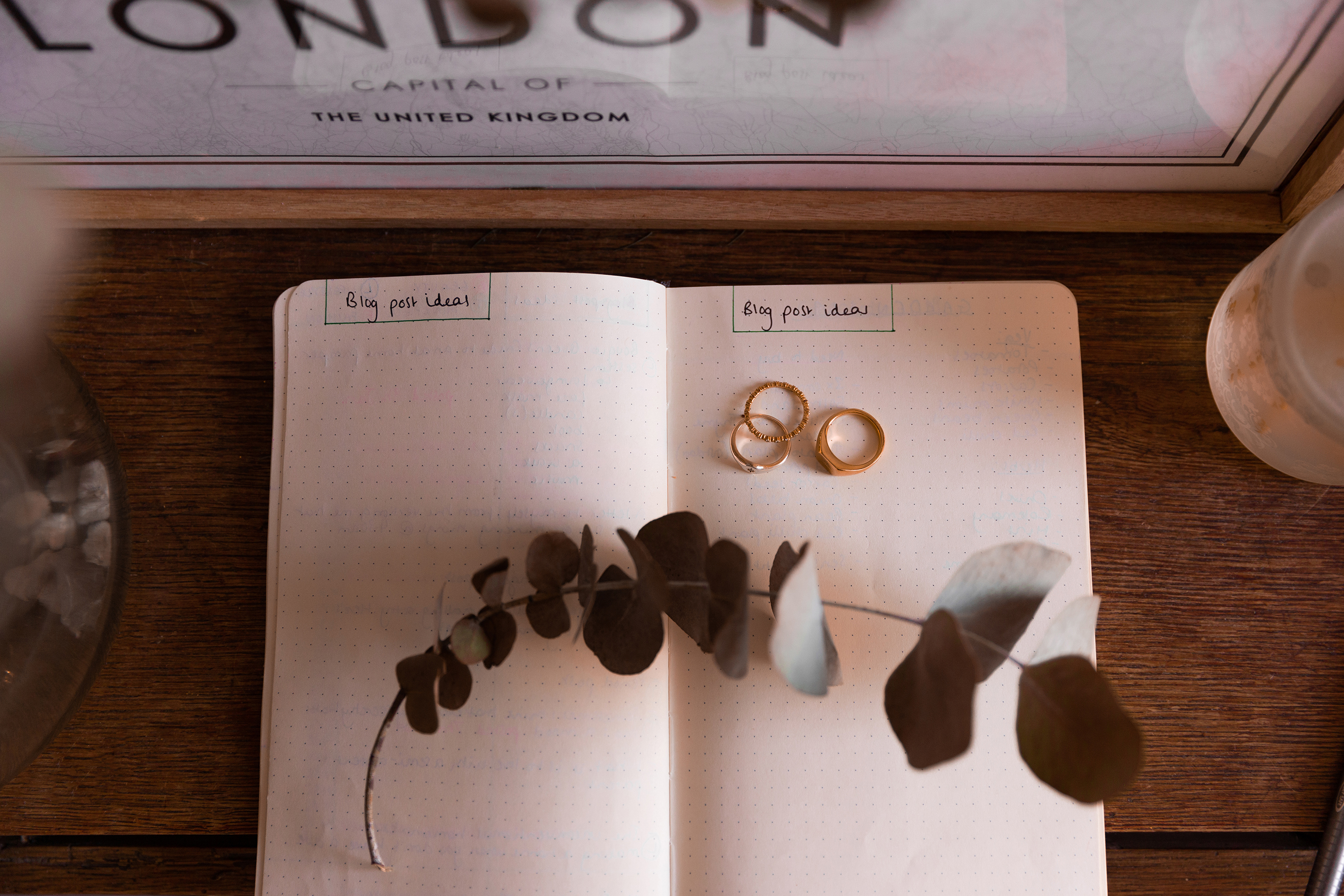 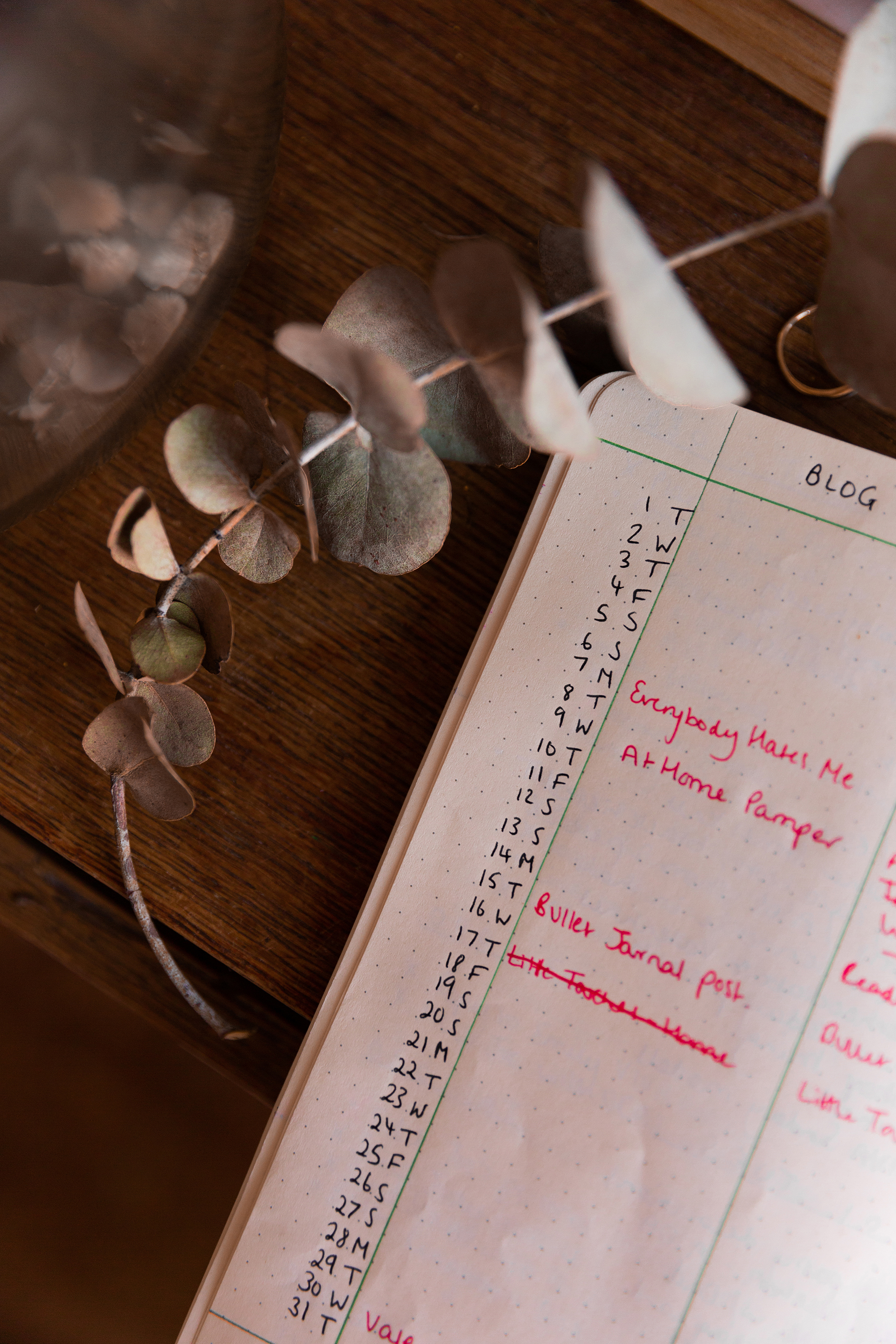 Fairly self-explanatory, these rolling sections are for daily note-taking and tasks. I simply pop the day and date in (14 01 MON, for today), underline it, and then add a bullet point list beneath with everything I need to remember/do for the day. There is a key for organising these as laid out by the creator, but this was a bit fiddly for me. I'm always flicking back and forth on my daily notes to make sure nothing has been missed so I didn't need to use the symbols for missing or moving tasks, but these are designed to help you analyse your use of time and priorities, so you might find the specialised system is helpful for you.

Whilst I maintain an excel spreadsheet with my yearly earnings and tax, I'd not broken my acquired jobs down into monthly categories, so this was a section I was keen to include. The aim is to map out which months are most popular and where I find I'm earning the most, but also gives me a more realistic idea of my monthly income, as opposed to the yearly overview. I've divided these pages up into a few sections, beneath which I name the company/brand, the agreed deliverables, the fee, and whether the job has been completed or not. Once I reach the end of the month, I'll divide off a line or two and total the amount earned, and then start again with the new month beneath. 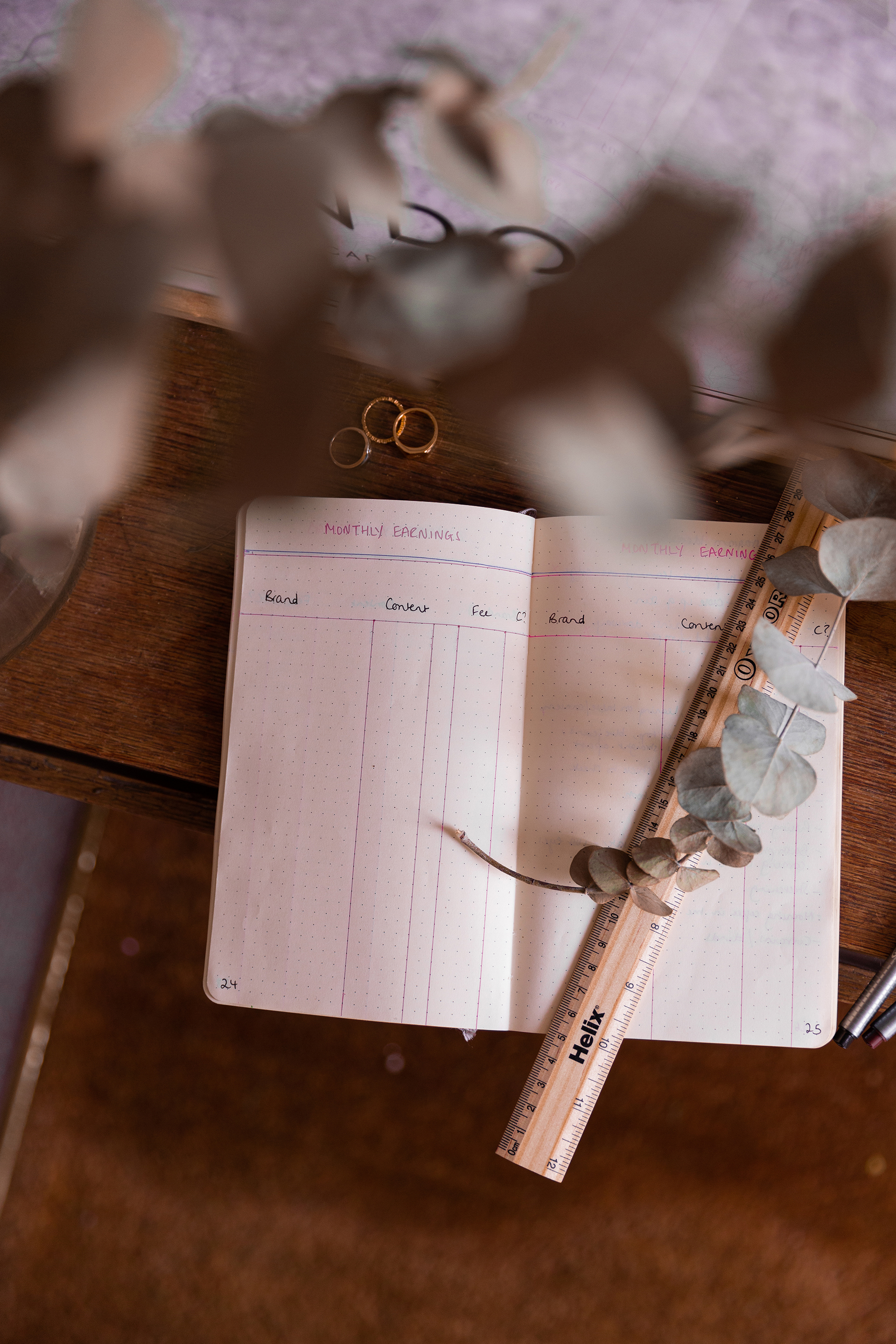 My intention is for the bullet journal to become an extension of my mind; an actualisation of the noise in my head, neatly ordered into the appropriate boxes and streamlined for clarity and focus (as well as the catharsis of carefully inscribing the words by hand) . As such, not every entry is work-related. I have a birthday section too! This is included at the very back of the journal, and details the date, plus the age if it's an important one (Mum's ages are always important - if you forget, they never will!). I can add these into my future log or monthly breakdown if I decide to, but I quite like having this secret section for something that feels so personal. All of my favourite names in one place: delightful. 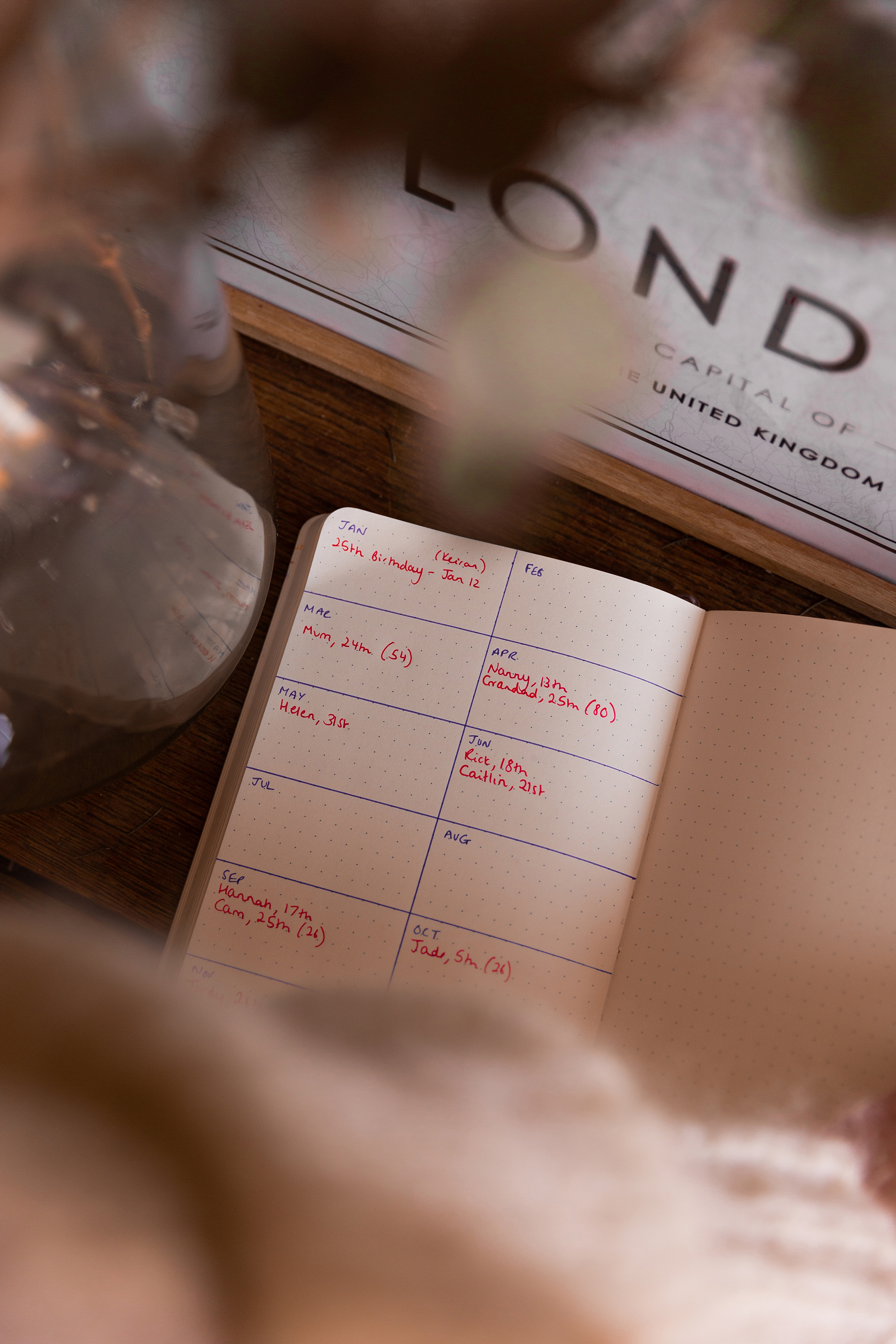 And for the most part, that's it! From what I've seen it's fairly common to adapt your method and the sections you use as you go along, so I'll post an update in a few months or so to share what has changed and what I've found most useful. In the meantime, let me know if bullet journalling is something you've tried, if you have a particular structure of your own, or if you prefer to keep all of your lists and notes digital. I'm keen to pinch ideas, as always!