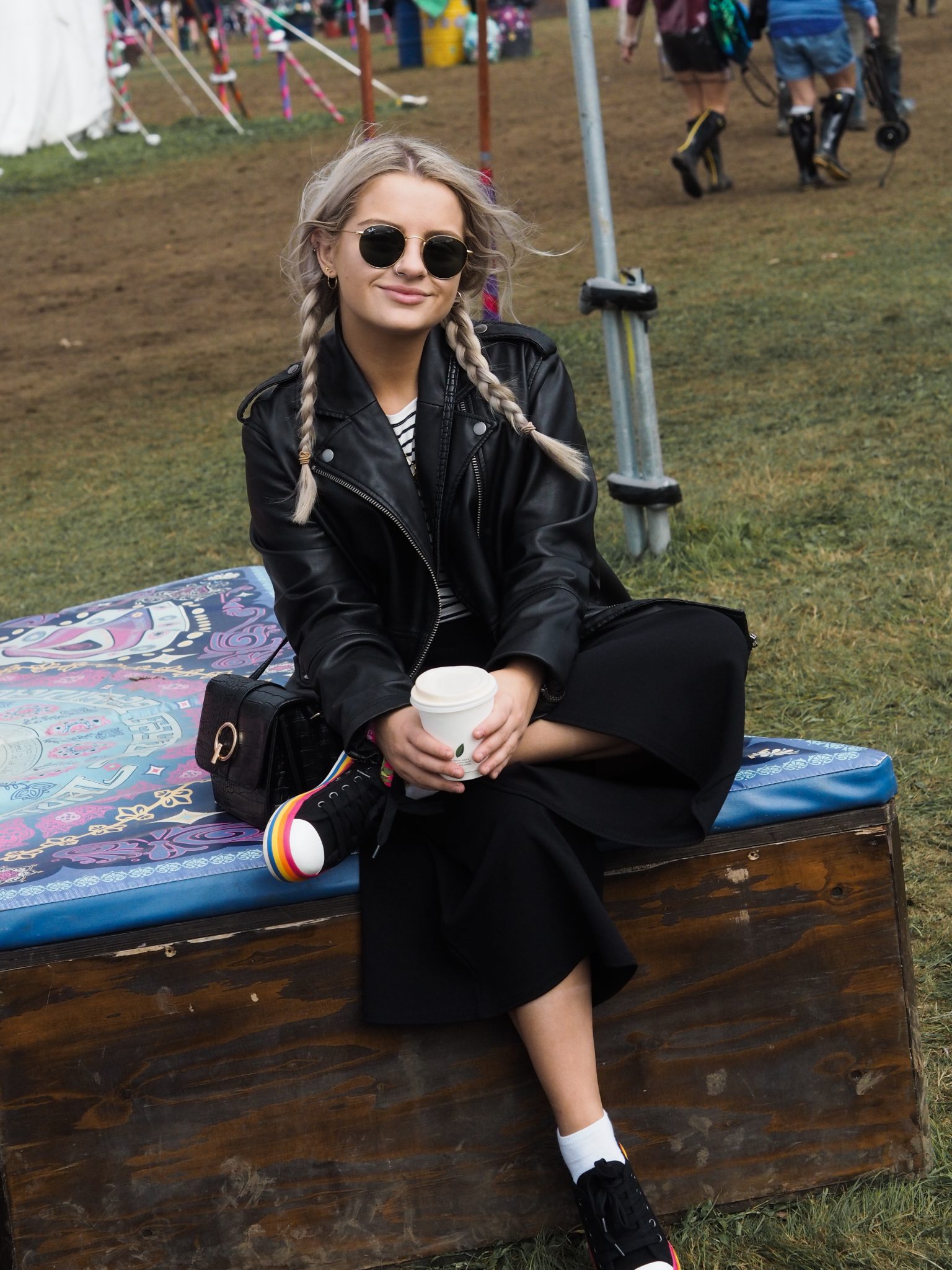 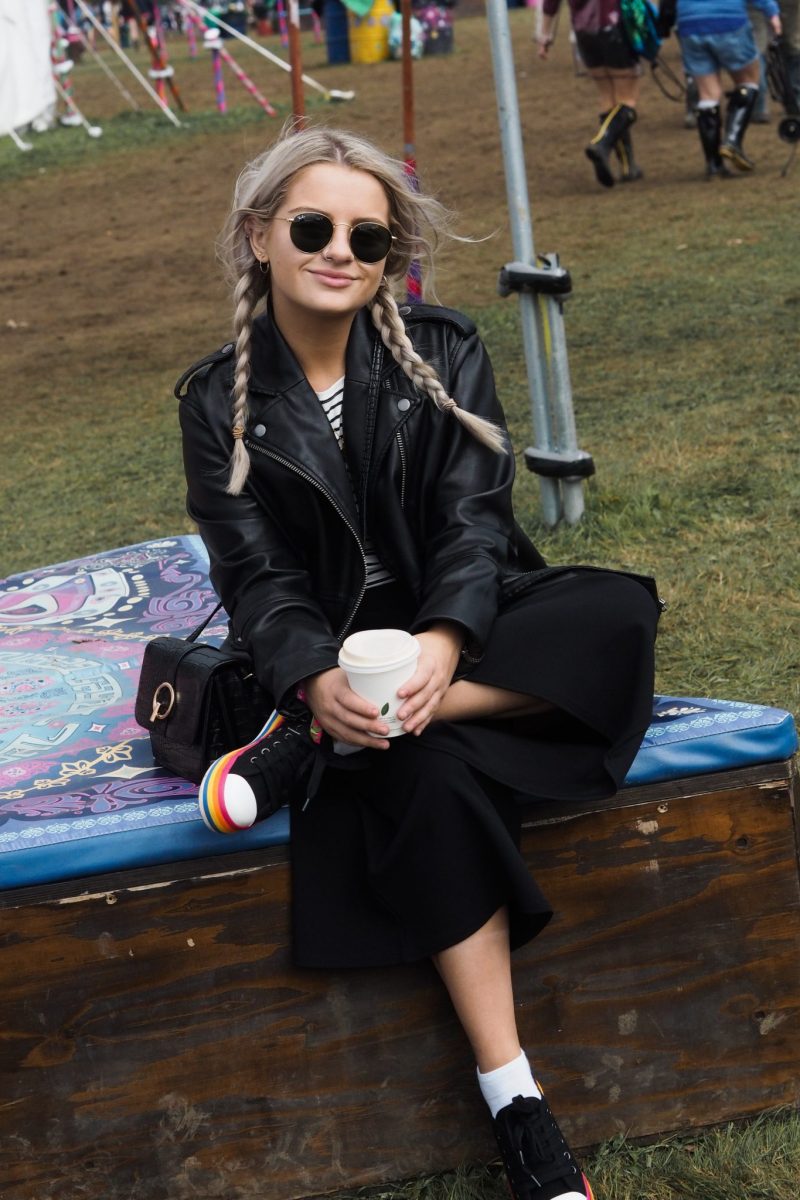 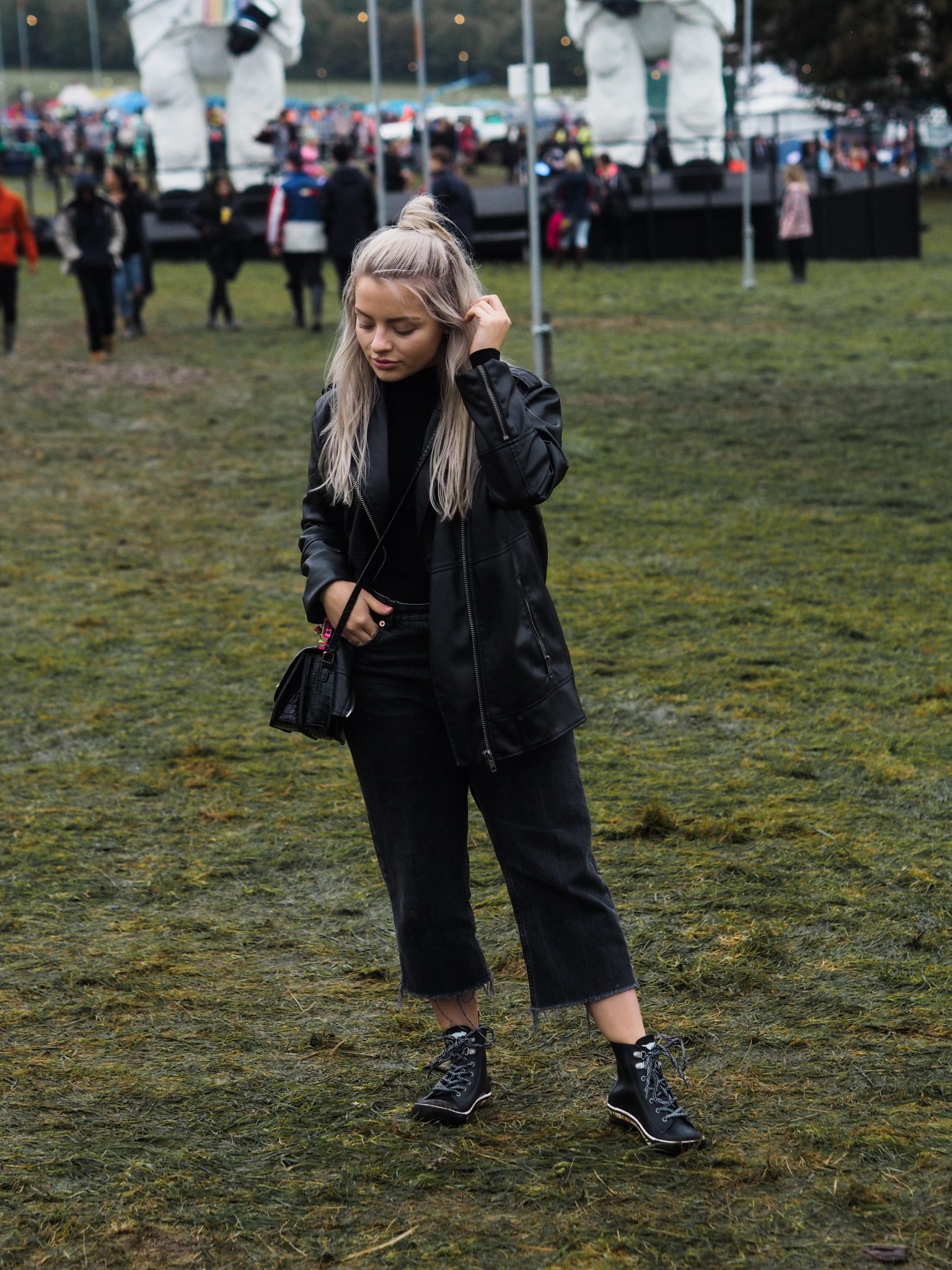 I'm currently sat in my local coffee shop, trying to type up this Bestival diary whilst two blokes sit next to me, chatting away about cycling and expensive bikes and gossiping about the new age of Instagram riders. They are desperately distracting, but I'm also loving that Instagram seems to have invaded every walk of life; Insta-famous cyclists, Insta-famous dogs, Insta-famous Nans - the sky's the limit.

Anyway, back to it! A couple of weekends ago I headed down to Dorset with one of my best friends Camilla, ready to set up our little tent and call it home for the next few days at Bestival. Vango had very kindly kitted us out with all the camping gear we needed (all the gear and no idea certainly comes to mind), and Rocket Dog - who had invited myself and my plus one along - also made sure to supply me with all the shoes needed.

Thank God I opted for at least one pair of their Rainy Boots, because blimey did I need them.

The weather certainly wasn't on our side, and actually, the Thursday when we arrived turned out to be the best of a bad bunch. It was windy but not too cold, so after struggling to put our tent together and stop it from blowing away (we had help from a very handy outdoor instructor camping next to us, I will admit) we enjoyed a quick cider before heading into the main arena for the first time. 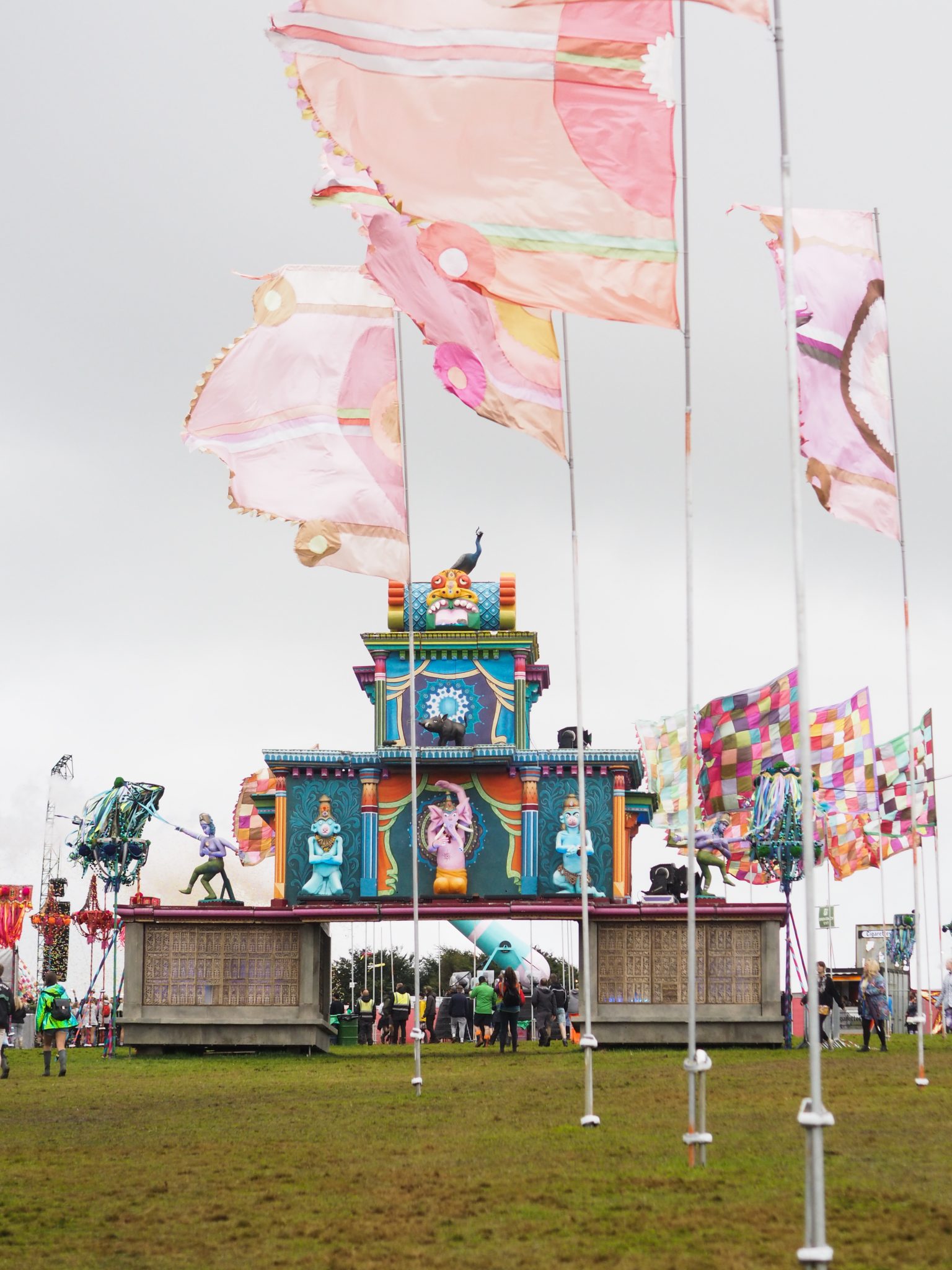 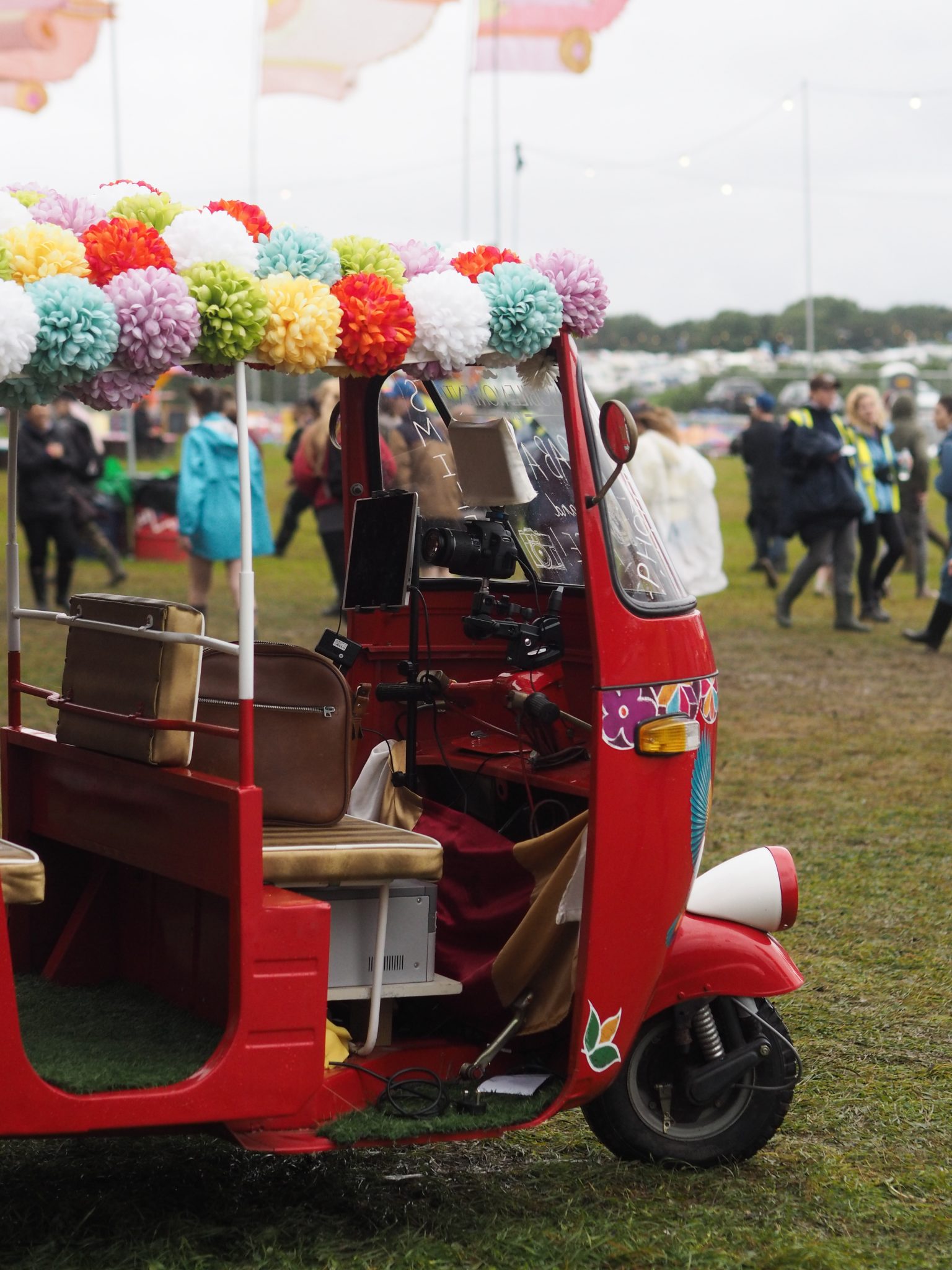 Firstly, it is whacky af. Amidst the stages was a giant Kanye West rainbow head, a giant robot, two giant astronauts and a giant disco ball. Bigger is better with Bestival, and that theme continued through to the world's largest confetti canyon (which looked unreal when it went off, FYI) and the world's largest bouncy castle, which, everyday I said I was going to go on, but in typical me style, I never actually got round to doing.

This year was the year of colour, so everywhere you looked there was someone dripping in fluorescent sequins, dressed head to toe in lycra or donning some kind of feather contraption. This was the land of glitter, and it stretched as far as the eye could see. I obviously didn't get the memo as I lived in black all weekend, not least because whilst I love the idea of frivolous festival fashion, trying to pee in a portaloo after unrolling a full length body suit never tickles my fancy.

Nonetheless, Bestival was as bizarre, outlandish and quirky as expected. On the final night we took a wander into the Ambient Forest, which was only a few minutes away from the booming music of the main stage, but which consisted of fairy-light lined walkways amongst a spread of towering trees and a huge set of wind chimes that you could bang with a little tool for absolutely no reason at all. This is where we stumbled across a small wooden hut, brimming with people singing along to an acoustic guitar, with a roaring fire in the centre of the room completing the hippie stereotype. It was amazing. One minute we were bouncing around to Dizzee Rascal, and the next we were humming backing vocals to a pretty decent rendition of Outkast's Hey Ya. 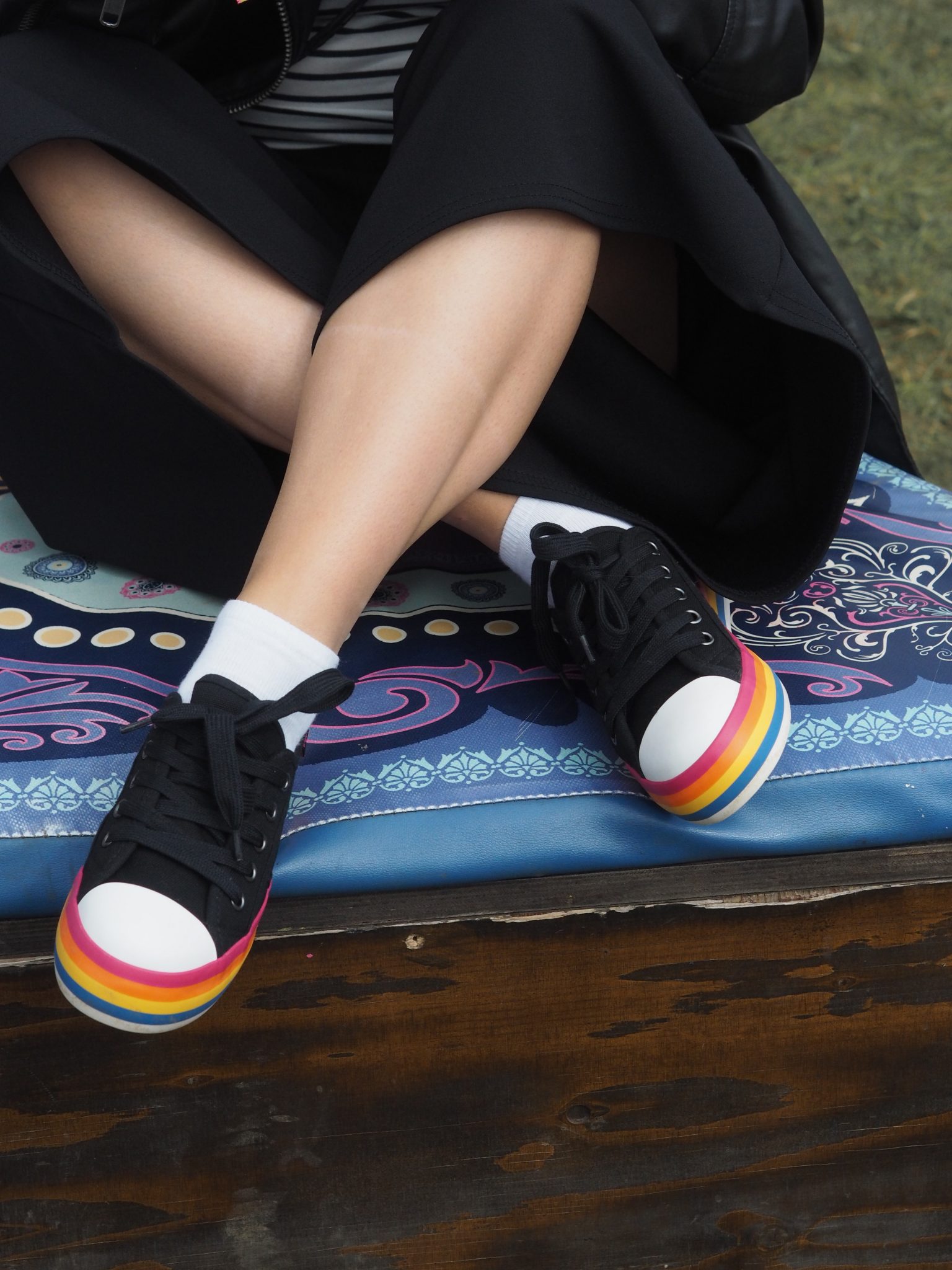 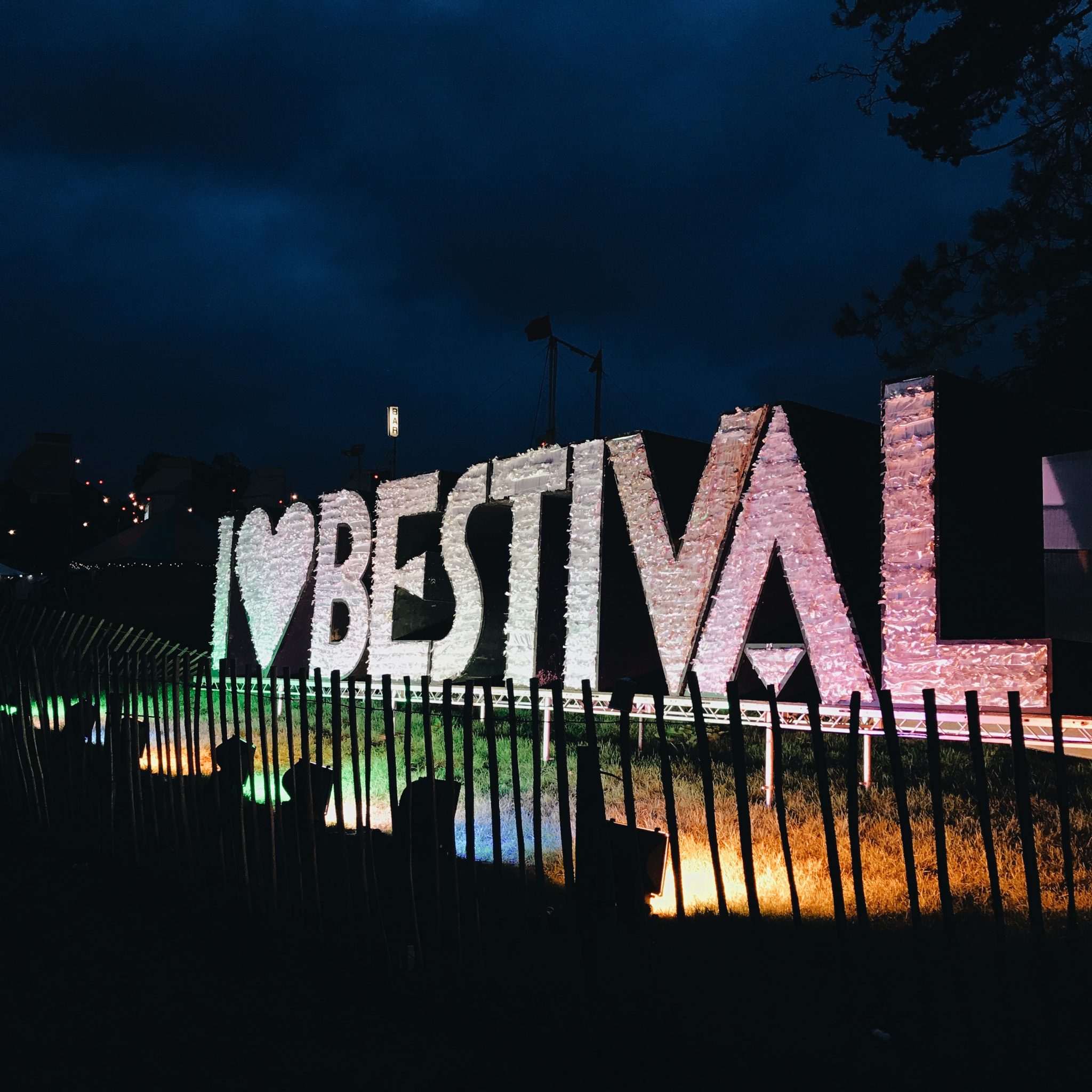 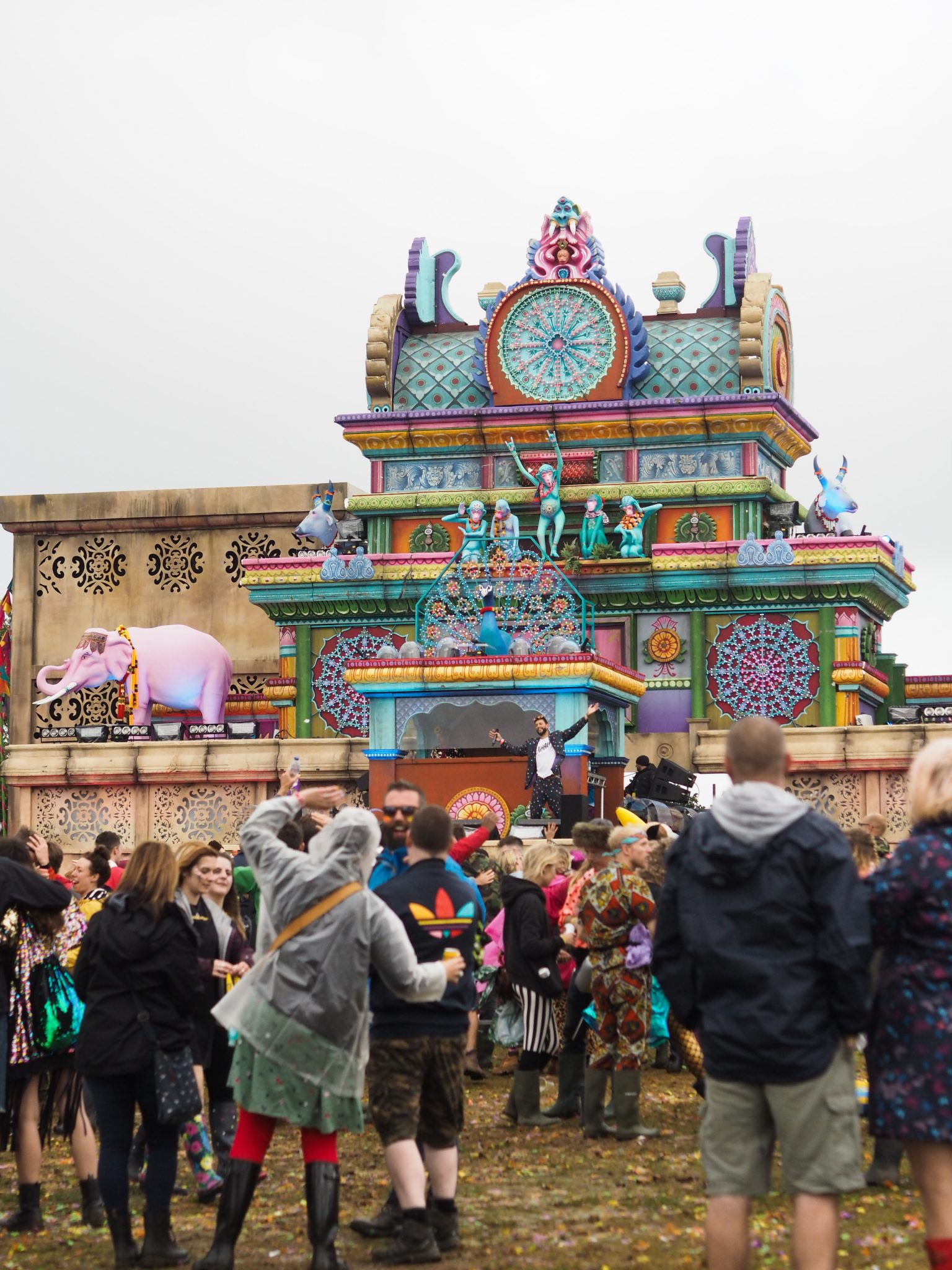 I can't deny that the weather did put a bit of a dampener on the weekend (both literally and figuratively), and since every day came with its own downpour, we did spend a lot of time napping in the tent. We actually ended up leaving on Sunday - a day early - which turned out to be a wise decision considering that on Sunday the opening of the main area was delayed due to the mud needing to be dredged, and then closed later on because of the high winds.

Nonetheless, the vibe of Bestival was really special. Each festival is its own beast, with its own vibe and its own way of being, and whilst some can feel a little aggy (*cough*Parklife*cough*), Bestival was super chilled and friendly and somehow has managed to stick it's backyard, hippie roots despite now being one of the biggest festivals in the UK. Even though the music wasn't 100% to my taste (read: I only recognised a handful of the names in the line-up), we were never short of things to watch or listen to, and found ourselves happily floating from tent to stage whenever we fancied a change.

Bestival's reputation as being a little wild and wacky is one of the reasons I near-on snapped Rocket Dog's hand off when they invited me along, and it certainly lived up to the expectation. As soon as we arrived we were absorbed into the Bestival bubble, where eating a burrito for breakfast is just as normal as happily carrying a drunk guy back to his tent and the giant robot is universally acknowledged as the best meeting spot.

This post was sponsored by Rocket Dog, but all opinions, imagery and wording are my own. 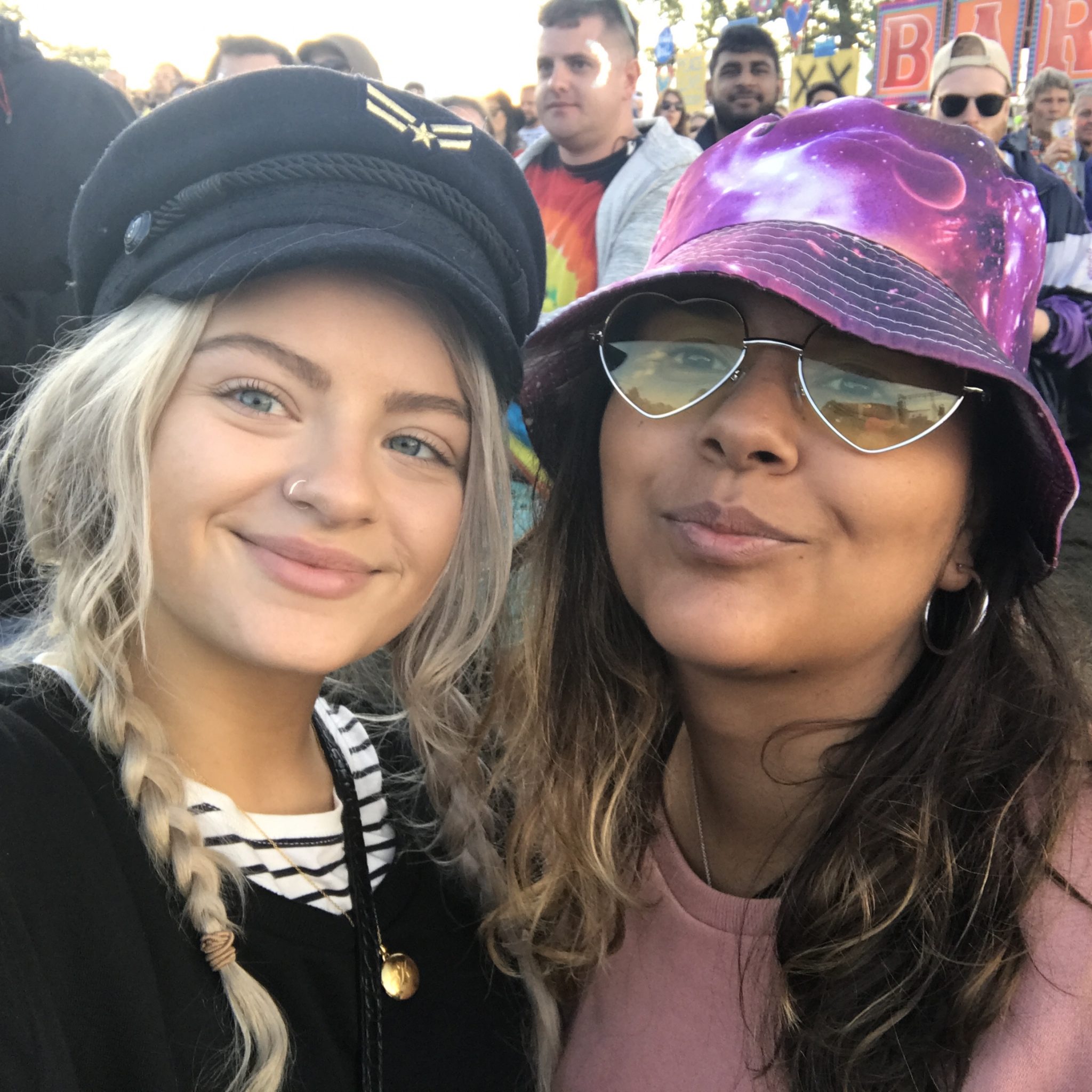 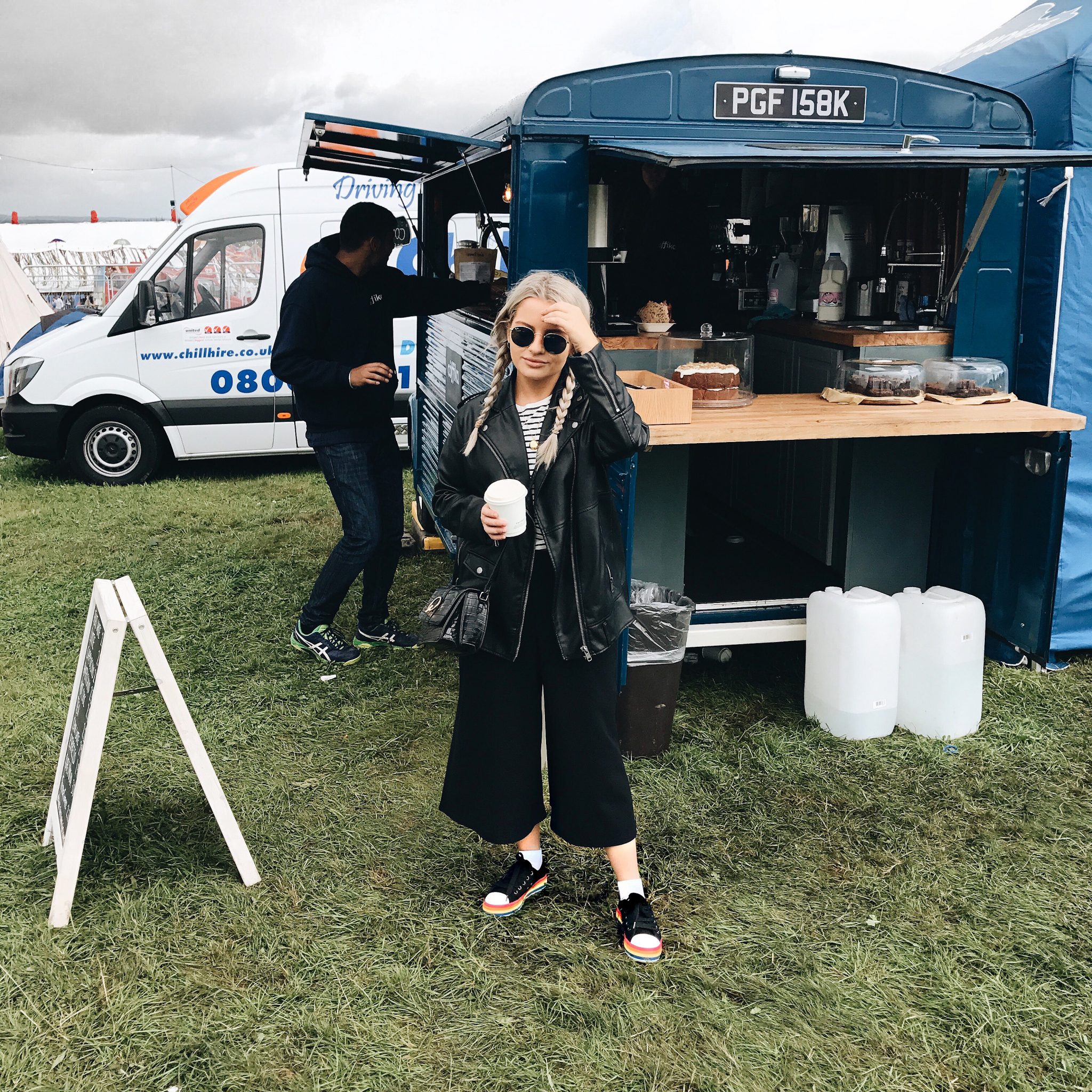