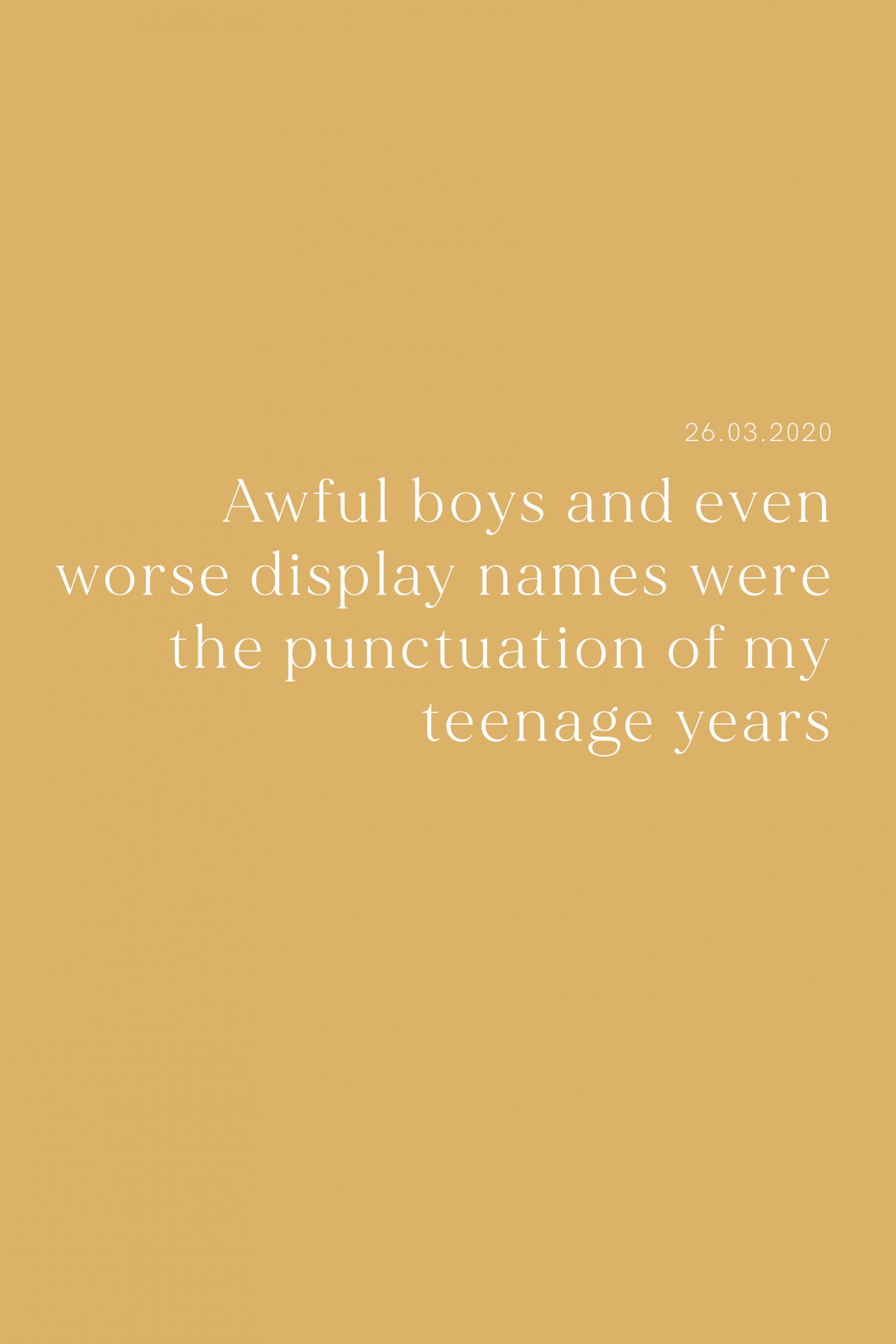 My Disastrous Dating as a Teenager Through The Era of MSN 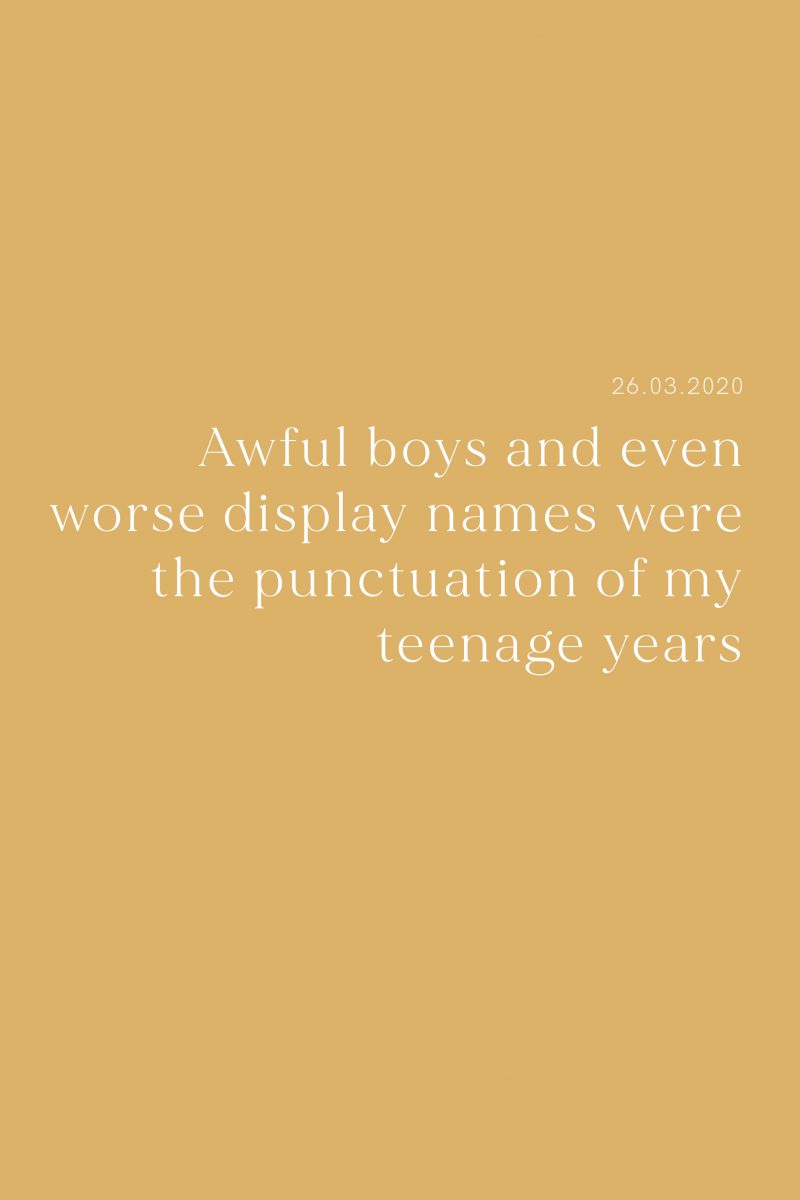 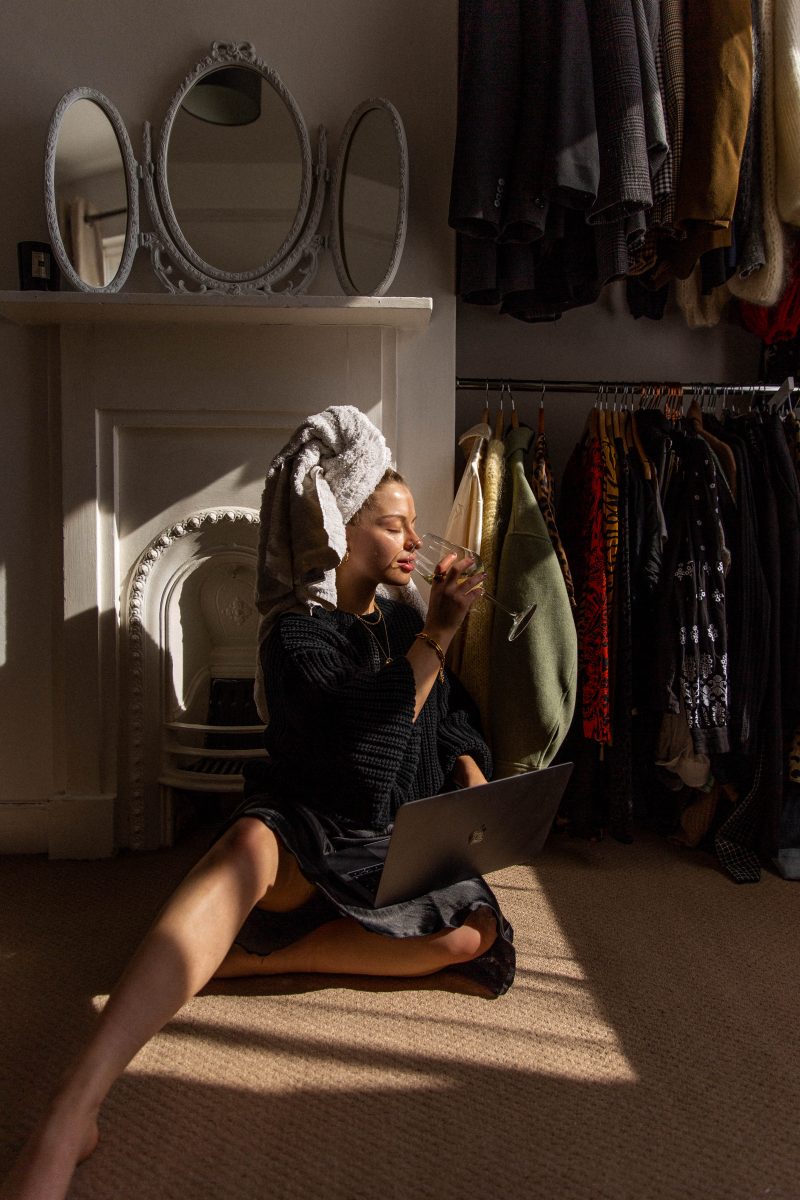 At one point during my teenage life, I discovered that I could change the names of songs in Windows Media Player and then play said songs so the new custom title appeared in the PM of my MSN name (I think you can already tell that I was effortless at growing up and definitely very cool). Believe it or not, I once used this song “trick” to try and impress a boy.

Unfortunately the display name you are about to see is 100% accurate and I sadly have the screenshots to prove so.

I was in love with Chris Brown at the time (that didn’t age well) so likely attributed my fake serenade to the same 18 year old plastered across my walls, certain that my tech wizardry would confound and intrigue the MSN chat mate I had never met in person.

Oh. Okay, maybe music isn’t his thing. Maybe he’s not much of a talker. Maybe his friend has hacked his MSN account and that’s why he’s not replying properly (oh the excuses I used to make for boys who were clearly not interested in me). I need to say something back though otherwise the conversation is going to die. Should I change the song again? ‘Chloe Is Rly Amazing’ and claim it as the second single? No, he didn’t laugh the first time and he’ll probably wonder why I’ve Limewired so many songs with my own name in. Don’t try so hard. Just be cool. Really kl.

Reader, he didn’t even bother to block me or appear offline. There he remained, the glaring green of his VERY ONLINE icon announcing in no uncertain terms that he did not want to speak to me. It was the online equivalent of declining someone’s offer of a drink only to then turn and accept a bev off of someone better looking and less needy.

This was typical of my experience with boys as a teenager. I was acutely aware that I wasn’t particularly pretty or skinny or popular (what we all believed to be the trifecta of greatness at the time, which is troubling considering how young we all were) and so despite my own bravado, my sense of self-value was pretty low and I tried very hard to compensate. I was very matter of fact about things; this is likely where I rank a on scale of fit from 1-10 (and numerous times my friends and I were ranked by the boys who surrounded us, even in the late teens year of sixth form), so this is what I can expect. I’m not going to be chased, or not at least by anybody who isn’t trying to finger me in a park or who isn’t too old and invariably a predator. I’m a middler - not butters but not buff either - and this is what middlers do. We exist on the periphery of popularity, friends with the good-looking girls but not good-looking enough ourselves to warrant concentrated attention. Not quite hideous enough for repulsion, either; a secondary home for bored chat, could look good on a fuzzy webcam, might agree to do things she doesn’t want to do because she wants me to like her.

A middler! Never had a boyfriend but has spent many hours BBMing boys who never message her back after snogging her and giving her tonsillitis (true story - his name is Lewis and I’ve cursed him every time I’ve had tonsillitis since. I got on a train to meet him and he didn’t even walk to the station to greet me, made me walk to his house alone instead and then fell asleep when I was there. Not worth it.).

I was hopelessly optimistic, even when I'd spend many late nights messaging the same boy on MSN, only to then see him in person, log on the following day and go ignored.

Maybe he didn’t see the notification.

… Nothing. And still nothing. More of nothing. Seconds and minutes and hours of nothing but staring and self-loathing and the searing rip of rejection. Should I say something? He’s normally the first to speak but I’ll say something.

God loves a trier but apparently the boy who spells misspells saw as ‘soor’ does not. What inevitably follows is a meticulous post-mortem of all MSN chats and BBM conversations thus far, desperately searching for the point at which it went wrong because it really really felt like it was going to go right. Emergency support is called in via a best friend who shares her confusion with a throng of :S emoticons. In the hysteria of madness a ‘nudge’ is briefly considered but rightly written off as being the real kiss of desperate death. And so it is left, in silence, the hope of first love dwindling in the blank space of an MSN convo which never went far enough to warrant a scroll down.

It wasn’t always instant rejection. Sometimes it was repeated rejection, revived on the other side in moments of boredom and welcomed back in hopeful naivety. One boy I fancied for a long time used to speak to me and then ignore me fairly routinely, chatting to me for hours and then disappearing when he found someone better. He’d blow hot and he’d blow cold. Once he told me I blinked slowly like a cat which I thought was ~ very deep ~. I said I was hungry when I was sat in his bedroom and he wouldn’t let me walk downstairs to get a snack, he had to smuggle a bag of ready salted crisps upstairs and then snuck me out when nobody else was around. I think he also fell asleep in my company which, now I look back, isn’t a flattering trend for my teenage ego. Many years later this boy went on to date my cousin which is entirely unrelated but funny in a ‘huh, small world’ kind of way.

Ah, who else to pluck from the hoards of suitors who did not fancy me? What about the boy who invited me to his house, made me awkwardly eat a roast dinner with his older brother and girlfriend and then never spoke to me again? Or the boy who very plainly told me that if I walked up to him in person he’d pretend not to know me (still went to meet him, of course)? How about the boy who tried to stuff his hands down my pants on the side of a busy road and then blanked me thereafter when I refused to be touched up? So many success stories to choose from.

As funny (and disturbing) as my ill-fated teenage dalliances were, I did learn from my rejections. The bar was so disastrously low that really, things could only improve. As I bloomed into my late teens and early twenties I grasped that I didn’t have to settle, I didn’t have to chase, and I never had to let someone’s grubby hands touch me when I didn’t want them to.

I became more sure of myself, more confident in dictating how I should be treated and striking off anything that fell short. I enjoyed the sweet victory of later rejecting those who had rejected me and considered it a win for the 14 year old version of me who pretended she wasn’t bothered but whose self-worth sincerely was (never 4get). I grew up. Through years of disappointment I gleaned how trashery operated and was able to guard myself from similar trashery moving forward (well, mostly. The guy I lost my virginity to also stopped speaking to me the day after but I promise from then on it improved).

Reflecting back, I recognise the vulnerable teenager who just wanted someone to like her. It's a near-universal experience, those awkward growing pains of not feeling attractive enough or valuable enough as we bundle towards adulthood. Of wanting the same kind of attention we see in music videos and on TV and that our friends get from their boyfriends who don't ignore them when they see them in the McDonald's near the cinema. There's a thread to be teased out in terms of the shitty behaviour of teenage boys which was accepted as a given at the time - boys will be boys! - but for now, recalling all of these fumbles with 'romance' (if you can call it that) does muster some fondness.

The display name however? That I bitterly regret. 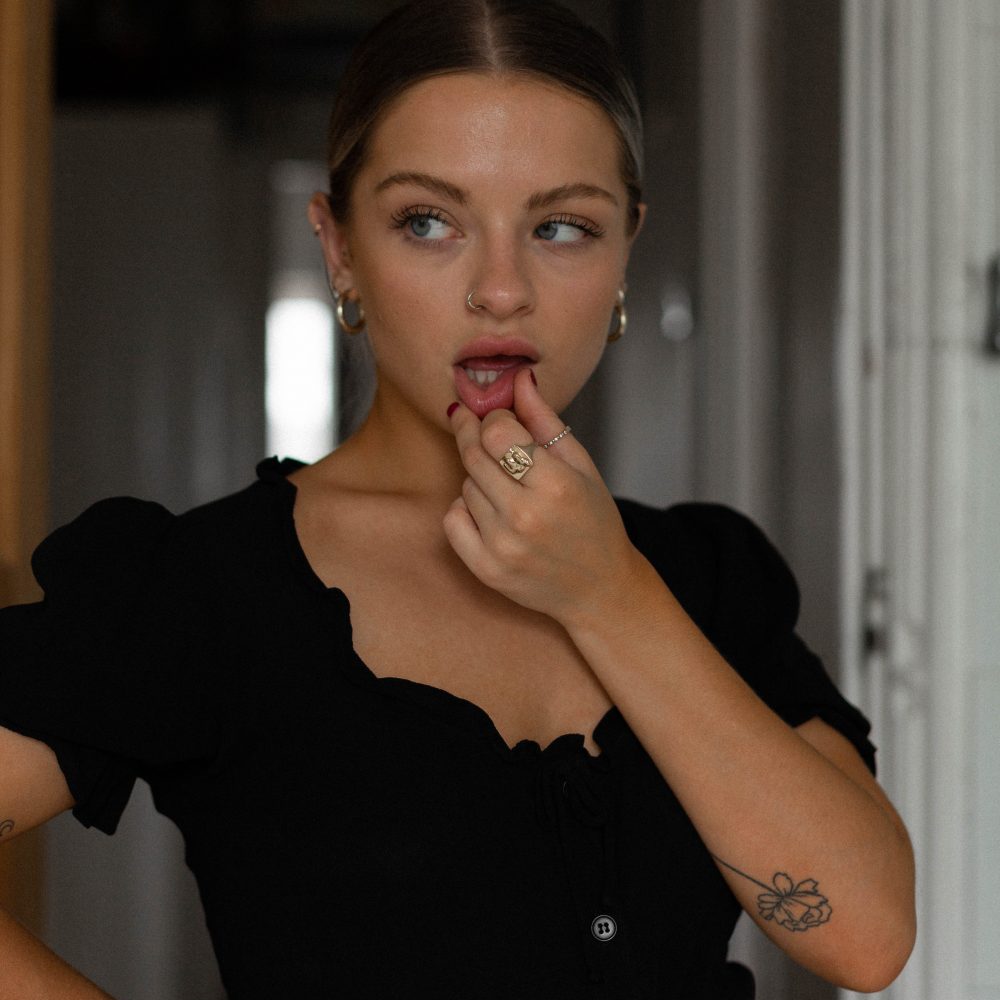 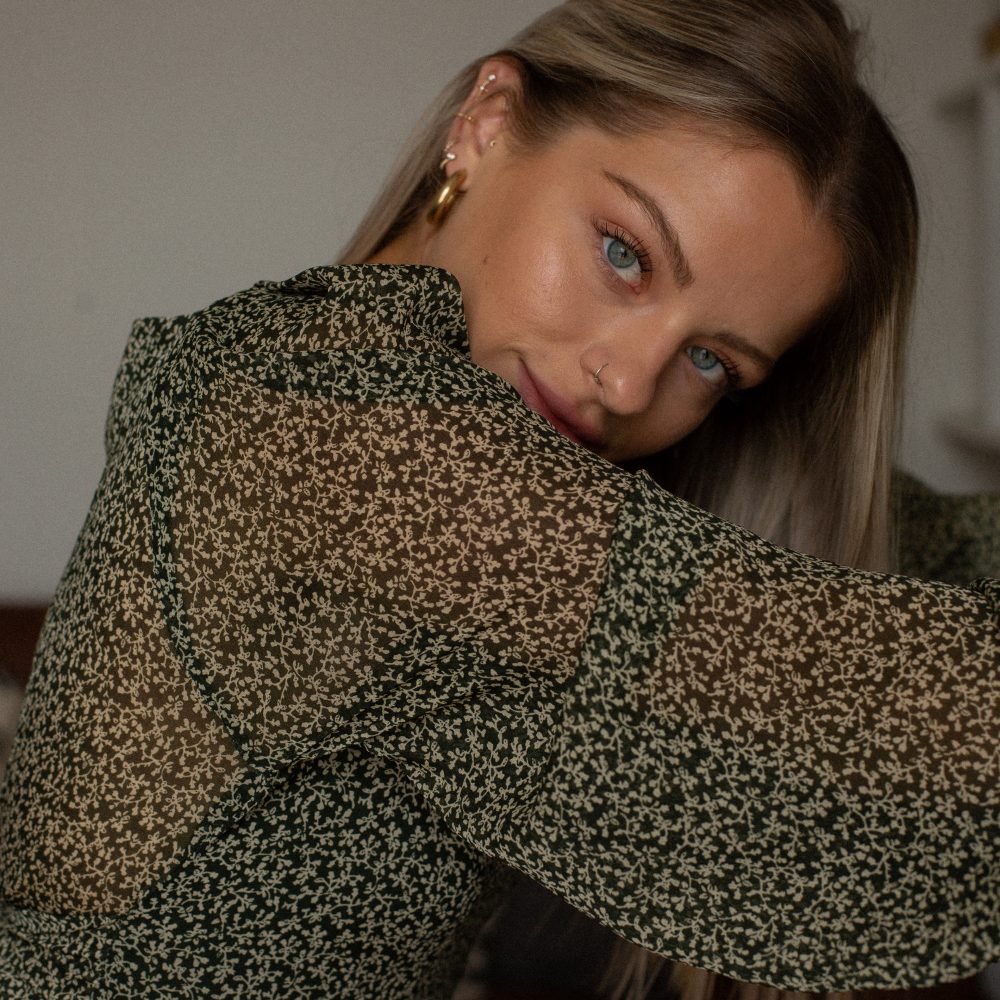 I wore the fancy boots! I did walk to the restaura

Stumbled across these photos in my phone from last

To all the people who found their way into creativ